Zombie from the Okanagan 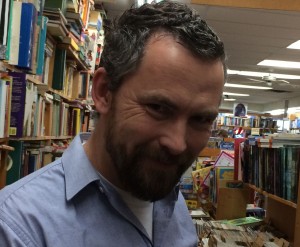 Occasionally–and only rarely–blurbage from a publisher can’t be improved upon.

When widowed father and substitute teacher Peter Giller leads an eleventh-grade class on a field trip to a plastics factory, he thinks the worst that could happen is that the parent volunteers won’t show up (they don’t), the kids will be rude (they are) or the free lunch will be terrible (it is).

Then a leaking pipe sprays Peter and the students with a mysterious pink goo and “the worst that could happen” spikes from inconvenient to catastrophic. At first, the goo’s side effects are mild: short-temperedness, sawdust-scented B.O. and an unquenchable craving for bacon. Then things get spooky: Peter’s fingers start falling off, his students forget how to read, no one has to pee—ever—and empathy for human suffering plummets, especially if anyone gets between them and their bacon.

Peter can’t figure out what’s happening—surely he’s not a zombie? At no time in any movie does a zombie drive a car and count on his reattached fingers the ways in which he is not a zombie, and anyway, Peter craves bacon, not brains. But normal people don’t put their bodies back together with staple guns and thumbtacks, or contemplate biting off ears. Peter’s definitely not fit to be around his children, and his mother-in-law “temporarily” adopts them.

Peter’s children are all he has left, and he’ll do anything to be with them again. He races across the country in a stolen ambulance to face down pinstriped bureaucrats, affectionate farm girls and monsters plucked from mythology in his search for the cure—if it exists—to his horrifying condition.

Schroeder, we are also told, lives in Penticton, British Columbia, with his wife and two sons, “and practices drums for hours at a time. He is co-secretary of his sons’ school’s parent advisory council so if you smack talk him you may regret it. Adam earned a master’s degree from the University of British Columbia and teaches Creative Writing at UBC Okanagan. He loves the Pittsburgh Steelers. He is the author of In the Fabled East (Amazone.ca Best Books of the Year), Empress of Asia and Kingdom of Monkeys: Stories, each a finalist for national or international fiction awards (Commonwealth Writers’ Prize for Best Book)—none of them won, but that’s fine. His new novel with Douglas & McIntyre, All-Day Breakfast, is his first and best foray into the world of zombies.”