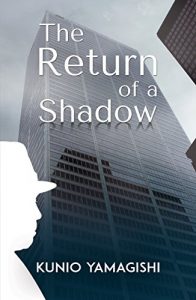 Kunio Yamagishi of Courtenay has had his novel, The Return of a Shadow (Austin Macauley, 2018) accepted into UBC’s Rare Books and Special Collections.

The protagonist of Yamagishi’s story, Eizo Osada leaves his wife and three young sons, one of them only two years old, in Japan to come to Canada in the 1930s to earn money for the family. When Japan attacks Pearl Harbor in 1942, setting in motion the internment of people of Japanese descent, Eizo is caught up in the turmoil and also interned. It is many years before Eizo is able to return to his family in Japan. Will his family accept him after his 43-year absence?

In 2019, The Return of a Shadow was shortlisted for the Rubery Prize, an international book award for indie writers, self-published authors and books published by independent presses.

Kunio Yamagishi did not experience Japanese-Canadian internment camps himself, as he was born in Fukushima, Japan, and educated in Tokyo. He immigrated to Canada without knowing about the internment camps and was devastated when he found out about this historical injustice. He has suffered from ambivalence towards Canada since. Along with the Canadian Government’s official apology, Yamigishi was able to reconcile this dilemma by writing his fictional book, which is based on the historical facts.

UBC’s Rare Books and Special Collections section holds many books and precious artifacts related to British Columbia’s history including, for example, the Wallace B. Chung and Madeline H. Chung Collection, which is one of the most extensive collections of its kind in North America. It contains more than 25,000 rare and unique items, including documents, books, maps, posters, paintings, photographs, tableware, and other artifacts. Donated to UBC Library in 1999, the Chung Collection represents an unique and extensive research collection of items in various formats related to early BC history, immigration and settlement, particularly of Chinese people in North America, and the Canadian Pacific Railway. One of the most exceptional and extensive collections of its kind in North America, the Chung Collection has been designated as a national treasure by the Canadian Cultural Property Export Review Board. 9781786937155