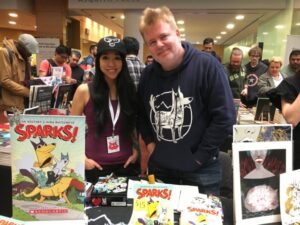 North Delta-raised Ian Boothby, an award-winning comedy writer best known for his work on The Simpsons comics (based on the American animated television series of the same name) as well as cartoons for The New Yorker and MAD magazine, co-created the graphic novel series Sparks! (Scholastic, 2018) with artist Nina Matsumoto. That book received the Christie Harris Illustrated Children’s Book Award in 2019 at the BC Book Prizes. Sparks, a super hero that saves lives is actually two cats, Charlie and August who dress up in a mechanical dog suit. In the third title in the series, Sparks! Future Purrfect: A Graphic Novel (Graphix/Scholastic $36.99), Charlie and August try to take a break on a tropical island. But when weird things start to happen and they discover that the island holds a surprising secret, they’re blasted off on another crazy adventure. This time they have to save themselves. ‎ 9781338339932