Following a long line of British charity collection dogs, a Victoria dog played an inspiring role in the Great War. 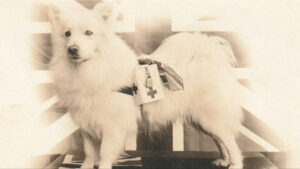 Muggins, whose owner came from Saanich, became famous for raising money for the Red Cross and veterans' associations during and after WW1. Photo Saanich Archives.

Muggins: The Life and Afterlife of a Canadian Canine War Hero tells the true story of a dog who raised today’s equivalent of a quarter million dollars between 1916 and 1920.

Muggins: The Life and Afterlife of a Canadian Canine War Hero (Heritage House $22.95)

It was the afternoon of Remembrance Day, 2015 and Grant Hayter-Menzies was busy signing copies of his latest book, From Stray Dog to World War I Hero: The Paris Terrier Who Joined the First Division (Potomac Books) at Tanner’s Books in Sidney. The book was a biography of a heroic stray dog who had become mascot to the American First Division in WW1. Retired University of Toronto professor Dr. Sylvia Van Kirk walked up to him and asked, “Have you ever heard of Muggins?” 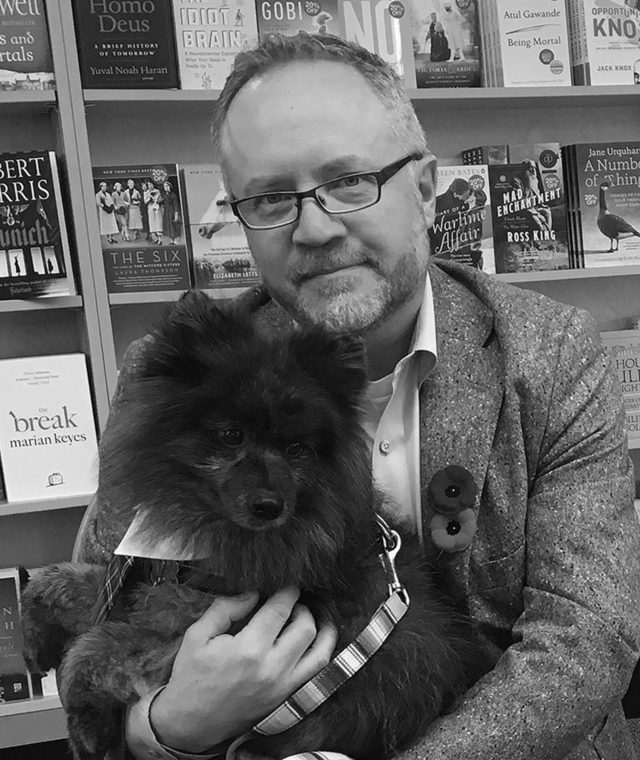 Author Grant Hayter-Menzies at a book reading event with his dog, Freddie.

He hadn’t. The professor briefly explained that Muggins was a purebred Spitz dog who had lived in Victoria and raised thousands of dollars (equivalent to a quarter million dollars today) for wartime charities, most notably the Red Cross, between 1916 and his death in early 1920. Van Kirk had been researching Muggins and wanted to work with Hayter-Menzies on a project to put her subject into a book. 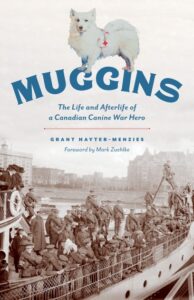 The author declined at first; as a biographer he generally preferred to do his own research. But when she reappeared about four years later at another of his signings—in Victoria’s Bolen Books—she had him convinced to do the book on his own. It appeared to be a slam-dunk as she had already done most of the research based on newspaper and magazine entries: all he would have to do is add some context to the Muggins story.

Which, it turns out, is where this book excels.

From upper-class Victorians even remotely connected with Muggins, to the build-up to the Great War and beyond, Hayter-Menzies deftly places readers into the scene throughout.

“…the news [of war] had a galvanizing effect on Victorians,” he writes. “Perhaps for the most part because the quiet seaside city was a place of retirement for former colonial military officers, whose blood never failed to run hot for a marching military band or any of the military activities that took place.” 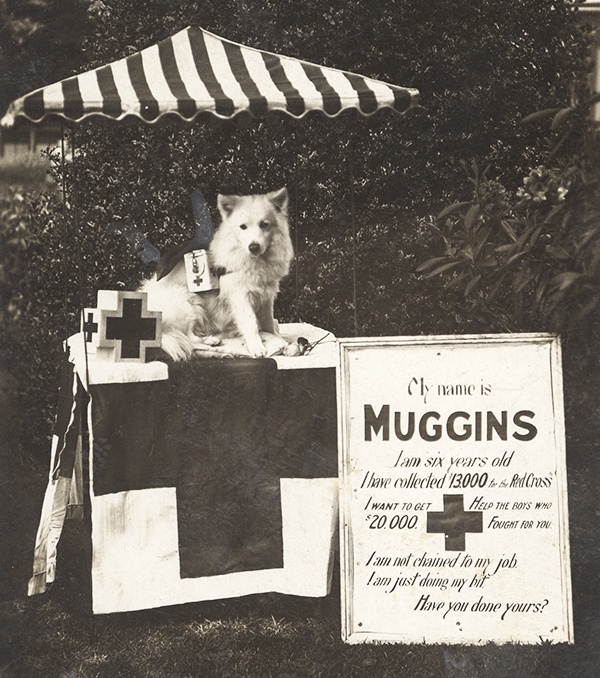 Muggins at his portable collection stand for the Red Cross, 1918. Photo: Saanich Archives.

Although the question of when humans first domesticated dogs is unresolved, written records show they have been used in war at least since ancient Greek times—for communications, tracking, guarding, scouting, packing, soldier rehabilitation and as mascots. Their popularity as collection dogs may not be as well-known. From the Victorian era until after World War Two, charity collection dogs were a popular sight in British train stations. They continued their charitable calling even after death, when the dogs were stuffed by taxidermists and kept on display, often in doorways to charity stores or train stations. Victoria is well-known for taking many of its cultural cues from Britain in the late 19th and early 20th centuries.

Readers first hear of Muggins in his role as a charity collector dog in the Daily Colonist of August 6, 1916 reporting on his collecting for the Italian Red Cross, organized by Mrs. Charlotte Pendray whose husband Herbert came from the BAPCO paint family. Well-connected in the Victorian society scene, Herbert’s ancestral home was the Queen Ann Pendray mansion in the Inner Harbour, now the popular Pendray Inn and Teahouse. 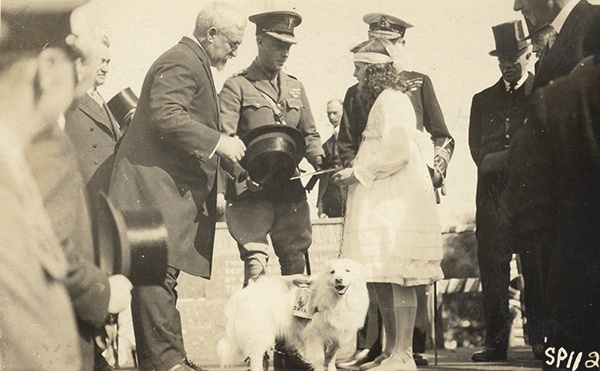 Postcard of Muggins and the Prince of Wales, with young Doris Baker presenting a photo of Muggins to the Prince, Premier John Oliver on left. Photo Saanich Archives.

It’s around this time when Muggins really gets started. The sweet-tempered dog quickly becomes famous among passengers of liners like the Empress of Asia docking at Victoria Harbour. One passenger, a prominent American named Samuel Brown Kirkwood, was as impressed with Muggins’ modus operandi as most everyone else. He loved watching the action when Muggins would enter the ships’ casinos. Muggins’ first line of attack was to distract the players, circling the table and nudging knees as he passed. Should that method not produce results, Muggins would begin barking, jumping up so the coins in his collection boxes rattled noisily. “If this method of advertisement did not secure the attention of the players, which was not often,” Kirkwood wrote,” he did not hesitate to jump upon one of the tables and remain there until all had contributed.” Puzzlingly, Muggins did it all without a handler.

Before long, Muggins was sporting postcards of himself for sale; with a patriotic background of the Union Jack and Canada’s flag of the day, the Red Ensign. Among images of him with the Prince of Wales and General Sir Arthur Currie, the book’s 24 illustrations include ten postcards. 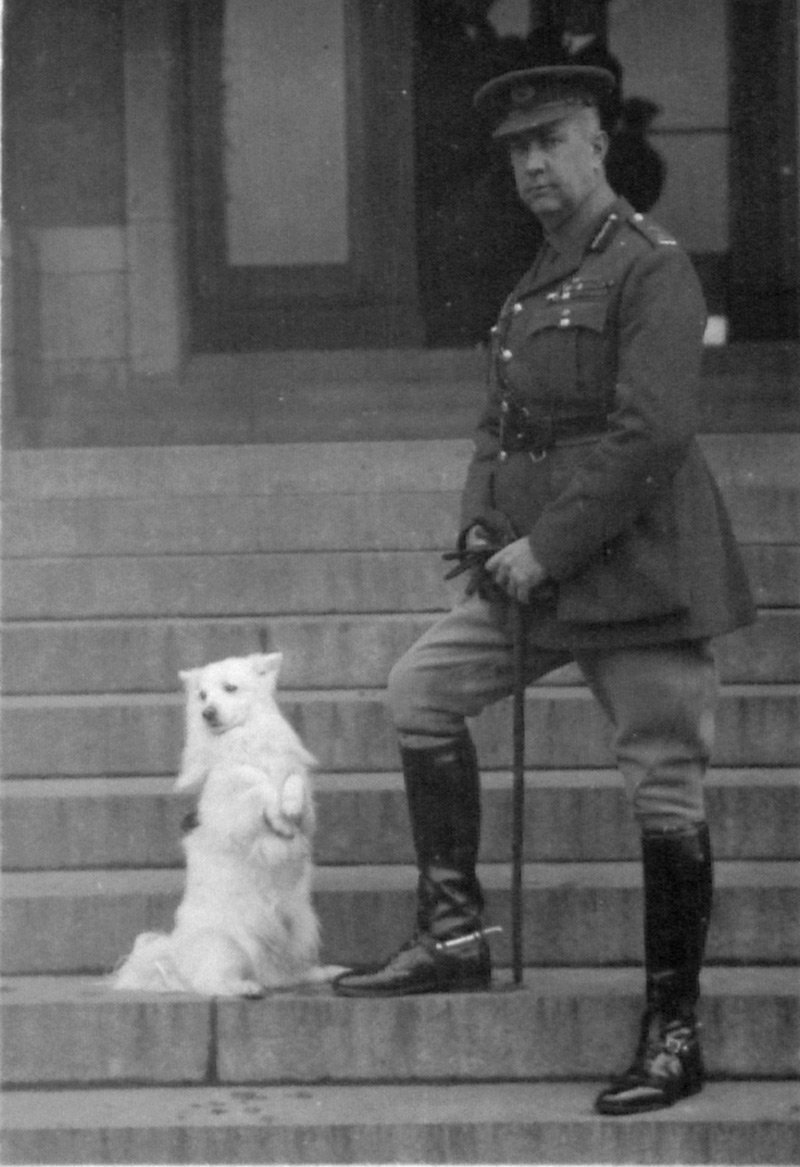 Muggins’ fame wasn’t bound to BC. He raised funds for the Halifax Explosion of 1917 for example. Several US publications trumpeted his reputation including a photo spread in the New York Times, flanked by photos of 1917-1918 stage stars. And Muggins travelled to Seattle to help raise funds for the American Red Cross.

Muggins’ charity work came to an end when he contracted pneumonia and died on January 14, 1920, a life humanely ended by a veterinarian. He was stuffed and mounted by a taxidermist and displayed in several public locations. It seems the Great War wasn’t his last fundraising effort: a few weeks after war was declared in 1939, Muggins was displayed above the Red Cross Superfluities Store at 1218 Government Street in Victoria as an inspiration to passersby.

Hayter-Menzies never lost his original inspiration for this well-researched volume: “Had Dr. Sylvia Van Kirk not approached me to finish what she had begun, with her many years of research and deeply-held belief that Muggins’ story needed to be told, I would never have had the pleasure and honour of writing this book,” he concludes.

To see a newsreel clip of Muggins in action, circa 1917, use this link.