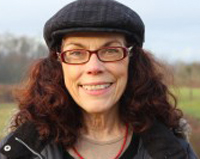 Because her mother suffered from schizophrenia, Susan McCaslin was initially skeptical of visions and anything smacking of the paranormal. “Mom had heard frightening voices that made her act in self-destructive ways,” she says, “and I didn’t want to hear them or get caught up in them.’

Then, in 1969, at the age of twenty-two, Susan McCaslin met Olga Park, an elderly woman in Port Moody. For the next sixteen years Olga Park, a self-defined Christian mystic, became her spiritual mentor. McCaslin has now written Into the Mystic: My Years with Olga (Inanna, 2014).

Along the way, Susan McCaslin has had to overcome her skeptical mistrust of the words religion, spirituality and mysticism.

Olga Park had extraordinary visions since early childhood, but kept them to herself until later in life.  She was firmly grounded in everyday reality, not at all crazy, but one who had matured through these unitive experiences, becoming more integrated, loving, and wise. So I came to trust her, her voice, and the balance of reason, emotion, soul, and spirit she embodied.

Olga Park’s presence somehow woke me up, gave me access to my own deeper self as it connected to the larger world.  Through her, I came to explore my inner experiences within a safe but flexible (ever expanding) containment.  Yet I found myself up against questions of language when trying to write about my relationship with Olga and her legacy in my life after her death in 1985.

In the process of composing my spiritual autobiography, Into the Mystic: My Years with Olga (Inanna, 2014), I felt compelled to provide some provisional definitions of terms for readers who might pick up the book, bringing to it their own preconceptions, fears, and even negative experiences of both religion and spirituality.

The word “religion” can generate more hostility than the other words embedded in the title of this piece, and perhaps rightly so. People mistrustful of religion examine history and notice how many of the major religions have been and continue to be tied to empire-building, rigid belief systems, gender inequalities, corporate capitalism, wars, and the exploitation of the “have nots.”

Some contemporary writers, however, such as Karen Armstrong, a former nun, point out that many of the world religions have also given the world deep experiential wisdom based on empathy, love, and compassion.  Armstrong, having written incisively on Christianity, Judaism, Islam, Buddhism (and others), argues that religion contains both violent and peace-making streams, but is not necessarily responsible for all the world’s ills.

The word “spirituality” for many is a softer, gentler, more inclusive term than “religion,” less indicative of fundamentalism and rigid belief systems.  Yet it, too, remains problematic for many, and rightly so.  For years I have placed myself, and continue to do so, among those who indicate they are “spiritual but not religious.”  The etymology of the word “religion” is “to tie again.”  So what kind of binding or tying might the word suggest? For many it has meant being bound to the creeds and beliefs and moral teachings of the institutions, but for some, like the poet Dante, it meant being tied (interconnected) through love to the larger movements of “the sun and the other stars.”  Certainly the founders of many religions were human beings who lived and taught out of a sense of relationship with something larger and more inclusive than the movements of ego.

Olga Park as a young woman

There are valid reasons why people may be averse even to softer words like “spirituality” and “mysticism.”  For one, they can be vague.  They have meant so many things to so many people as to have become almost meaningless. The archetypal image of being on a “spiritual journey,” has devolved to something of a cliché through overuse.  Such words can also offer refuge for that which seems irrational, “flakey,” or “woo woo.”  They may suggest life orientations opposed to reason and common sense.  One thing we have gained from the Enlightenment, the Age of Reason, whatever its limits, is a mistrust of obscure, abstract, over-generalized language that makes claims to states that are private and perhaps essentially incoherent, or that the person entering them refuses to ever question or reinterpret.
Clearly some forms of what passes for mysticism have been a refuge for egotism, elitism, cultishness, imbalance, dogmatism, and even madness.

Olga Park self-identified as a Christian mystic. The word “mystic” comes out of the mystery religions of ancient Greece, meaning both “an initiate,” and “to close the eyes or lips,” as when one looks deeply into the very ground of being beyond all dualities. But Olga Park remained well outside orthodox, institutional Christianity.

Although raised Wesleyan Methodist in the Yorkshire dales of England, she was attracted to the liturgy and music of the Anglican Church, then to Spiritualism and esoteric Christianity, ending up a hermit-contemplative living at the margins of society in Port Moody, British Columbia, completely outside the churches of her day.

Through Olga I learned that a mystic isn’t a quietist, one who retreats to a purely subjective reality, but one who temporarily withdraws from the outer world (of materialism, getting and spending etc.) from time to time in order to become grounded in a non-dual reality.  There in the silences beyond words and concepts, the divisions between inner and outer, between self and non-self, are recognized as false constructs.

Often such people return to the world to serve, carrying that deep presence of silence within them; so contemplation and action become two halves of a whole.  But for the genuine mystic, contemplation, meditation, or some kind of dedicated spiritual practice is essential and can become the base of activism.  Great ones like St. Teresa of Avila, Hildegard of Bingen, and (in modern times) Gandhi and Martin Luther King, Jr. spring to mind.

The mystical, contemplative streams in most religions have more commonalities than differences. They open the door to respectful conversations among the various faiths. I’m not just speaking of what has been called “interfaith dialogue” but genuine communion, direct engagement, shared experience coming out of our human condition as fellow creatures on the planet, needing to live in harmony with other species and life forms.

What interests me are principles not of competition, but of cooperation, how we are interrelated within nature, the larger ecological systems, and to Gaia the planet. Since my teens I have been fascinated with global spiritualties because of their capacity to awaken our potential to evolve, to come into balance with realities that transcend individual differences. From this perspective, I can agree with agnostics (un-knowers: those who keep open to possibilities beyond linear reason) and a-theists (those who, for whatever reasons, cannot embrace a traditional anthropomorphized God).

Since entering university after high school, I haven’t been able to believe in a strictly masculine God sitting at the top of a hierarchy outside the process of daily embodied experience, enthroned above it all manipulating things like a puppeteer.  However, through what has been called “process theology,” I have come to see other formulations of what some call God, Allah, the I Am, the One, the Goddess, Divine Feminine Wisdom or Sophia, Prana, the Tao etc. as unnameable presences and powers of love and expansiveness (both immanent and transcendent) working within the whole.

However we name (or are unable to name) these powers and presences alive in us and in all things is less consequential than our individual and collective experience of them.  And here is where the term mysticism is helpful, for it is generally acknowledged as the stream hidden within religion that addresses direct experiential knowing.

Within Islam there is the mystic stream of Sufism.  Within Christianity, there are the mystics within and without the churches whose experiences sometimes put them on a collision course with institutional religion.  I honour William Blake (poet, visual artist, and mystic), who drew from radical Protestant mystical traditions, like those of Jacob Boehme and Immanuel Swedenborg, but remained outside the Church of England of his day.

Sometimes I imagine conversations where someone asks, “Are you a Christian? What’s your spiritual orientation?  I reply: “Well, tell me what you mean by ‘a Christian’ and I might be able to give you some kind of a response.”  More often I find myself saying, “I’m an inter-spiritual person, a seeker, finder, a flawed work-in-progress who, as a poet fascinated with language, also recognizes its limits.

Not Christian or Jew or Muslim, not Hindu,
Buddhist, sufi, or zen. Not any religion

I belong to the beloved, having seen the two
worlds as one…

Susan McCaslin’s reflections on writing her memoir, Into the Mystic: My Years with Olga (Inanna Publications, 2014), were originally published as a blog on Inanna Publication’s website.  http://www.inanna.ca/

Her self-published books have been archived by the University of Manitoba in Winnipeg. She left many small, handmade booklets that remain undated. She also left McCaslin a filing cabinet of her unpublished records and writings. Susan McCaslin and her husband created a website on Olga at www.olgapark.ca

[Photo of Susan McCaslin with Olga Park, circa 1980 courtesy of Mark Haddock]