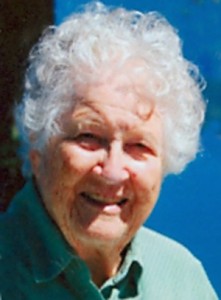 At age 88, Mary Buckerfield White, with Philip Sherwood (lifewriters.ca), self-published Buckerfield: The Story of a Vancouver Family. White’s father was one of the province’s foremost businessmen (feeds, seeds, and fertilizers) and her mother a leading member of Vancouver’s arts community. Mid-century they befriended and entertained at their home some of the most distinguished persons to visit Vancouver including C.D. Howe, Leonard Bernstein, Dylan Thomas and Dame Joan Sutherland. Novelist Ethel Wilson was Mary White’s aunt. White’s memoir contains numerous photos and anecdotes about Wilson. The 300-page family history was available in hardcover from Hager’s Books in Kerrisdale for $25. According to her personal assistant, Catherine Condon, Mary White died on February 25, 2015.