Profundity and a light touch 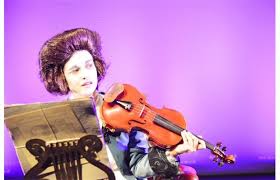 The extent to which we are pummelled by emails and social media makes it nearly impossible to venture forth without expectations. One has to almost plan to be ignorant.

So, having been impressed by the teaming of musical director Daniel Deorksen and director David Newham for Seven Tyrants’ ambitious presentation of Beggar’s Opera, I decided to go to the Jericho Arts Centre on the strength of curiosity, reading nothing in advance.

It’s such a treat to go to a show, knowing as little as possible, and leave delighted.

Of course the two surnames of the composers are known to all. When Mozart died, it was widely believed that he was poisoned. This eventually prompted Aleksander Pushkin to write a short play in 1830, Mozart and Salieri, depicting the murderer as being Mozart’s jealous rival, Antonio Salieri.

More than a century later, Salieri was again unfairly represented as a nefarious schemer and a hack composer in Milos Forman’s 1984 film of Peter Shaffer’s play, Amadeus. One therefore assumes Seven Tyrants Theatre’s presentation entitled Mozart and Salieri would be some sort of amalgam, delving into their relationship of the two composers and the suspected crime.

(The Vancouver Playhouse successfully produced Amadeus for their 1983-84 season, before or around the time the Seven Tyrants gang were born, so we’ll assume that had no influence. Having reviewed that show more than thirty years ago, I wondered  how the heck Seven Tyrants could pull off such a large-scale production.)

The good news is Deorksen and Newham have generated an entirely original show by deciding to have three actor/musicians perform music by Mozart and Salieri almost continuously. Dialogue is remarkably minimal. It’s not an in-depth psychological, biographical piece. It’s more of a celebration, or, as Newham suggests in his director’s message, “a religious ceremony.”

We are bathed in music. Mozart minces child-like, mischievous, rendering his character more like a circus performer than an actor, playing both violin and piano. Mozart hardly speaks. He is an icon, a symbol of genius. In a different stratosphere.

The all-too-human Salieri addresses the audience, not unlike a man pleading his case in a court of law, expressing his wonderment at Mozart’s gift as much as he expresses fierce envy, playing violin and bass violin.

The third character is The Player. She introduces the scenes in period costume, handling most of the singing as she plays her violin from the get-go.

It’s about THE MUSIC. As soon as the charming Player (Cate Richardson) introduces the prolonged Overture that renders snatches of Mozart’s greatest hits, we are transported into a dignified and playful wonderland. The sophistication of the playing by both the female version of Mozart (Masae Day) and The Player is such that we barely notice this is a production that doesn’t need a set.

While Masae Day is highly adept on two instruments, and Cate Richardson somehow manages to warble in a high registers while prancing and playing with aplomb, David Whiteley must manfully juggle his role as the confessional Salieri with his own musical challenges in the lead role.

For those of us who equate the ability to play the violin with going to the moon or discovering the theory of relativity, we can choose to be amazed; a professional classical musician might question the tuning and timing. The costumes by Ines Ortner are in-synch with the apparent resolve of Deorksen and Newham to mimic the “Mozartean knack for combining a light touch with profundity [program note].”

As for the poisoning of Mozart, well, it probably didn’t happen. Whereas Pushkin and Hollywood preferred the arsenic theory for dramatic reasons, and the Nazis wanted to blame Salieri, too, modern medical experts have concluded that Mozart was stricken by serious maladies during the final three weeks of his life: streptococcal infection, Schönlein-Henoch Syndrome, renal failure, venesection(s), cerebral hemorrhage and terminal broncho-pneumonia.