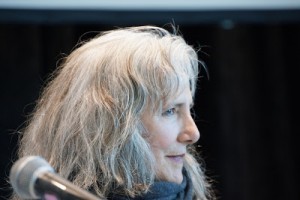 In 2015, Lissa Wolsak of Vancouver became the 30th recipient of the annual bpNichol Chapbook Award given out each year by Meet the Presses, an all volunteer-run collective promoting indie publishing in Canada. For her collection, Of Beings Alone: The Eigenface, she received $4,000 with $500 going to her Vancouver-based publisher Nomados Press, run by Meredith and Peter Quartermain. Unable to attend the award ceremony at the Tranzac Club in Toronto, Wolsak asked David Dowker to accept on her behalf. She twice saw bpNichol perform in 1988 and she recalls, “I was spellbound by his performances.”

Poet and essayist Lissa Wolsak is an “energy/thought-field therapist” and a goldsmith whose long poem sequences include Pen Chants or nth or 12 spirit-like impermanences (Roof, 2000), An Heuristic Prolusion (Documents in Poetics, 2000), The Garcia Family Co-Mercy (Tsunami, 1994), A Defence of Being, THRALL and Of Beings Alone: The Eigenface (Nomados 2015). A ompendium was released as Squeezed Light: Collected Works 1995 – 2007 (Station Hill Press).