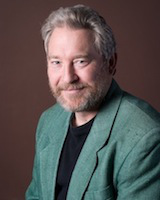 When Harold and Diane Rhenisch first went to Iceland in 2010, they agreed they both wanted to stay. After their three trips to Iceland—in summer, fall and winter—Rhenisch has written a memoir, The Art of Haying: A Journey to Iceland (Ekstasis $33.95), in which he chats with ravens, learns about knitting traditions and spends a month as writer in residence at Skriduklaustur, writing about the modern sagas of the Icelandic writer Gunnar Gunnarsson.

Born in Penticton on January 5, 1958, Harold Rhenisch was raised in on an orchard in the Similkameen Valley where his family farmed and he worked as a nurseryman, tree grafter and pruner. He studied drama and writing in Victoria, acquired writing degrees from UVic and UBC, before returning to live in the Cariboo for fifteen years, producing ‘bioregional’ essays and numerous books of poetry. In 2005, he won the ARC Magazine Critics Desk Award and the Malahat Review Long Poem Prize–and received the Malahat Long Poem Prize again in 2007. A seven-time runner-up for the CBC/Tilden/Saturday Night Literary Contest, he won the BC & Yukon Community Newspapers Association Award for Best Arts and Culture Writing in 1996 and the Confederation Poetry Prize in 1991. Tom Thomson’s Shack was nominated for two B.C. Book Prizes in 2000.

In 2007, Rhenisch received the George Ryga Award for Social Awareness for his book The Wolves at Evelyn, also shortlisted for the Hubert Evans Non-Fiction Prize. Until he moved to Campbell River on Vancouver Island in 2007, Rhenisch lived in 150 Mile House in the Cariboo–a region that he says begins at the auto-wrecking yard just north of Hat Creek. His affinity for the B.C. interior led him to contribute to Chris Harris’ book for the Grasslands Conservation Council, Spirit in the Grass: The Cariboo Chilcotin’s Forgotten Landscape (2007). He has continued to collaborate with environmental photographer and publisher Chris Harris for an environmental blog called www.okanaganokanogan.com. He has moved back to the Okanagan grasslands, an area he describes as Iceland without rain.

In appreciation of one of his mentor, Harold Rhenisch has edited In This Poem I Am: The Selected Poetry of Robin Skelton. He has also edited various non-fiction memoirs including Phyllis Nackomeckny’s Vidh, Lorne Dufour’s Joseph’s Prayer and Vangie Bergum’s Bestamor and Me.