When PuSh comes to bleat 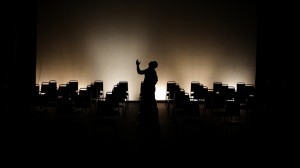 Mani Soleymanlou, the man in black

The talented one-man show-creator and performer of the unimaginatively titled One has traced his life story as a migrant, starting with a cursory account of being transplanted from his native Iran, at age nine, to Paris, then onto Toronto and Ottawa, before ultimately settling in Montreal where One was first performed in 2011.

For the first ten or fifteen minutes, we learn remarkably little about Soleymanlou’s family, his private life. We are told almost nothing about family connections left behind. And, having left Iran as a boy, Soleymanlou is far from being an expert on Iran. So he skims along, generating some curiosity about the destination of his monologue. Just where can we be headed to so quickly that merits jumping along this autobiographical route with so very few stops of interest?

It turns out Soleymanlou mostly wants to spend an hour telling us he is angry because he doesn’t feel that he really belongs any more in one place than another, he’s upset because people stumble when trying to pronounce his surname, he’s peeved because people ask him about his accent or his origins, and he’s disgruntled because most Canadians know bugger-all about Iran/Persia.

Soleymanlou has set up 42 chairs on the stage, six rows with seven identical chairs each, possibly to resemble the waiting room in a passport office—it’s that devoid of aesthetics—and so he moves from one chair to another, possibly with the artistic conceit that one chair is as good as another, one city is as good as another, they are all merely functional and interchangeable, so long as one particular chair is not your home, your allotted seat.

There are some welcome musical interludes, most delightfully ‘I Will Follow Him,’ a bouncy Sixties pop song that was a hit for Little Peggy March and Petula Clark, and Soleymanlou, best of all, exhibits a sublime skill with body language, especially for a burly man. He is clearly a talented actor, watchable, trained. But he’s no writer—at least not in this English translation.

The show had a promising start. After the usual preliminary advice to turn off cell phones, Soleymanlou appeared in a black t-shirt and advised everyone, “Frankly, I don’t care.” Something unusual right off the top. So here is someone who is going to be loose, operate outside the box of conformity, surprise us…take risks?

Halfway through his sometimes comical harangue, Soleymanlou asks his audience for a topic, any topic. Go ahead folks, let’s mix it up here… But this boldness is contrived, only part of his patter. As soon as a man in the front row actually takes him up on it and tosses out a suggestion, Soleymanlou is taken aback. He rejects the suggestion. He promptly veers into his next subject… Persian food.

Did that really just happen, one asks of One?

It doesn’t help that this monologue… is rife with pauses. That is… well, you see… there is this cumulative barrage…. of unnecessary pauses… between phrases… so that, after a while… these pauses… one after another…  after another… after another… kill… the pleasure of wondering…. what Soleymanlou might say…. next.

Equally disconcerting, Soleymanlou assumes a level of pervasive ignorance of Irani politics, in general. He has blithely assumed, for instance, that nobody has heard of Mohammad Mosaddegh, the Iranian Prime Minister who was overthrown by the CIA in 1953. Yes, Soleymanlou, we already know that was in order for the West to gain unfettered control of oil. We also know about Patrice Lumumba, Salvador Allende… We weren’t born yesterday.

Is it possible The Guardian is not delivered in Quebec. Is it possible that people in Quebec are less-informed or simpler dumber than people in B.C.? He who under-estimates his audience is lost. And if we learn precious little that is new about Iran, and we aren’t really privy to Soleymanlou’s private life beyond his grievances, what is memorable or laudable about One?

Immigrant guy gets to speak. It is merely politically correct.

From the thousands of Chinese labourers who died building the railway to the thousands of Filipina nannies who are persecuted as indentured servants today, there is no shortage of material for someone who wishes to expose the privations of being an immigrant in Canada.

On behalf of those millions of immigrants who were unable to attend a prestigious theatre school and who could never even dream of possessing the language skills, contacts and acumen to acquire Canada Council funding, there is much one or One could say about racial intolerance, prejudice and abuse in Canada.

Lightweight and disposable fare is not what we have come to expect from PuSh Festival programming.