Pitmen a hit at Jericho 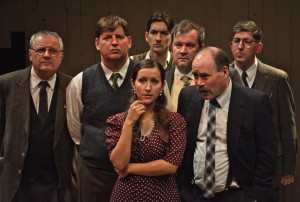 Walk on, walk on, with hope in your heart. And you’ll never walk alone.

Among the countless films and plays that have glorified British pluck are My Left Foot, Calendar Girls and The Full Monty.

Now Lee Hall, who wrote Billy Elliot, showcases the rightness of working class fortitude and British togetherness with The Pitmen Painters, at the Jericho Arts Centre til Feb 16.

In 1934, three “pitmen” from Newcastle’s Ashington coal mine, on their one day off, attend an art appreciation lecture at their union hall. They are joined by a boyhood friend—now a Marxist dentist—who can’t work in the mine because he was gassed in World War I.

Puzzled by their likeable art history professor who expounds about cherubs and religious symbolism, the gruff foursome agree they ought to try their hand at painting to better understand what this thing called art could be.

We decipher their personalities from quips and complaints as they gather on a weekly basis, in their Sunday suits, and begin to paint what they know—their neighbourhood and the mine.

They were sent underground at age ten. They don’t know Titian. They barely know Leonardo. The word “rubbish!” is their favourite expression, not far removed from those Yorkshiremen in the Monty Python skit who repeatedly bark, “Luxury!”

When a pretty girl invades their male enclave, hired by the professor to pose naked as a model, the would-be Rembrandts are too prudish and shocked to allow her to undress.

Even more alarming is the rich heiress who wants to buy a painting. They protest. It’s absolutely daft to fork over two whole pounds for a picture that is, well, rubbish. To sweeten the deal, she agrees to give them painting supplies. They grudgingly accept, but only if her payment is shared by the group.

It’s the Depression. An alarmingly skinny, chronically unemployed youth also attends these sessions just to keep warm. He is a subject of ridicule. But five years later, when he enlists for World War II, the often derisive men are distraught and plead with him to stay.

As they become more sophisticated, visiting galleries, having their own exhibitions, celebrated by the press, the Sunday painters remain fearfully devoted to their precious jobs, simultaneously abhorring capitalism. Art is a way of lifting their spirits out of the danger and monotony of the mine.

A crisis finally ensues when the heiress offers to provide a stipend to one of them, allowing him to quit the Ashington mine. The Karl Marx-quoting dental mechanic pleads with Oliver, their most gifted painter, to leave his mates, to follow the road of individual advancement—words of heresy for a man who values The Ragged-Trousered Philanthropists more than The Bible. But surely one of them should use art to flee the serfdom of the mine.

The freedom to be the next Vincent Van Gogh… well, that’s not rubbish. But Oliver knows that biting the apple of patronage will entail hobnobbing with the upper class. His liberation could be tantamount to a betrayal of self.

Paul Herbert quivers convincingly as the possibly virginal bachelor, Oliver, who is pursued by the chilly but well-meaning patroness, played by Alexis Quednau, who cannot respond beyond the strictures of her upper class attitudes.

Keith Martin Gordey is comically adroit as the union organizer who fastidiously follows rules and regulations. Burly John Prowse is convincing as the grumbling dentist who would have preferred an introductory class on economics.

Smartly directed by Jack Paterson, this dignified production is one of the most consistently pleasing shows in recent memory. The accents are remarkably consistent; the thoughtful dialogue isn’t rushed. The audience leans in; adding their own humanity to the sparse set: a union hall without electricity.

Based on a true story, this United Players’ presentation of The Pitmen Painters can be welcomed as an amusing and thoughtful play about how art is a staple of life. The pitmen’s ongoing discussions about the nature of art, and how it infuses all our lives with meaning, will be grist for anyone who feels our governments should be told there is more to life than money and hockey.

It’s equally viable to claim the heart and soul of this play is British socialism, a subject that will have less resonance in Kitsilano than in Newcastle, where the play premiered in 2007.

The Ashington coal miners are credited with the first major art exhibit in Britain to be solely devoted to working class artists.