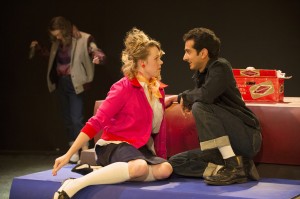 Grease is one of the most successful musicals of the modern era, the fifteenth-longest running Broadway show, so it need not be dismissed—or blamed—as the vehicle that gave the world John Travolta and Olivia Newton-John in 1978.

Although Gershwin is far from jealous, Grease captures the zeitgeist of an American era in the same way Hair! was important when it debuted on Broadway in 1968. Both are about rebellion and sex.

Rebellion has vanished from North American sensibilities, but sex doggedly preserves some relevance.

The current Studio 58 presentation of Grease, directed by Peter Jorgensen, is a welcome recreation of the original version of Grease that was first mounted in Chicago, before it played off-Broadway in 1971, then moved to Broadway acclaim in 1972.

The contrast between this rarely-revived original version and the well-known movie is worth the price of admission. Jorgenson points out some of the differences in the program: Originally Grease had coarse language and lewd actions on stage. Sure, it’s easy to view Grease as a gentrified, cruise ship descendent of West Side Story in which you are certain no one will get hurt, but it nonetheless evokes a very clear rejection of establishment values.

“Unlike the film,” Jorgensen writes, “Grease is not about the wholesome girl-next-door who has to change in order to be loved by the boy from the wrong side of the tracks. It’s simply about a bunch of curious kids who are liberating themselves from a sexually repressed society through rock and roll.”

In The Original Grease—as it’s called at Langara’s Studio 58—the female lead, Sandy, remains a goody-two-shoes for two hours, only to reject her Sandra Dee conformity in the final scene and embrace rebellion. She goes over the dark side—and wins. This is a far cry from the movie version in which Olivia Newton-Johnson flirts with outsiderism in order to reel in her rebel man.

Whereas, in “the bubble gum sweetness of the film”—to again quote Jorgensen—the love story between Sandy and gang leader Danny is central, it is the ensemble in The Original Grease that is the dominant force (again, like Hair!) at Studio 58. This approach is not necessarily better than the movie—just different.

The movie Grease begins with a romance between a boy and a girl at the beach, before school starts. We care about them. Danny is surprised to see Sandy is attending his high school in September. He falters, unwilling to be embarrassed in front of his rough gang. Flashbacks remind us of a summer love. So the movie appeals as a love story first, and a reflection of social values second.

In The Original Grease, however, we first see Danny and Sandy on the first day of school. We witness his shameful rejection of her. We don’t witness the romance that came before. It is only vouchsafed by the best song, “Tell me more, Tell me more,” aka Summer Nights. Love is only heresay… It’s the fate of a group of characters in The Original Grease that engages our curiosity and compassion. Four couples matter. A communal consciousness. A generation.

If there’s anywhere in town where you might count on seeing an energetic depiction of teenagers in love, it ought to be Studio 58. But if you have only four musicians playing the same four-chord progression for much of the night, it’s tough to replicate the intensity of a kick-ass musical. This low-budget production is a showcase for enthusiasm at the expense of singing, but we are charmed nonetheless.There are several songs from The Original Grease that deserve to be jettisoned, but we are pulling for this cast throughout. We want them to rise to this somewhat awkward occasion. These neophytes have been called upon to enact an essentially inferior version of Grease in order to satisfy an artistic conceit—hey, let’s do the real Grease—and at some level they have to realize they are pawns.

This helps to explain why much of the gyrating on stage translates as mock dancing. Their hearts are not in it. Only in the climactic Hand Jive dance contest do we see moves that are impressive, risky, fuelled by adrenaline.

These are talented people who were born long after Grease was a hit. Along the way they are forced to perform some terrible songs. Freddy My Love. Shake It At The High School Hop. It’s Raining Oh Prom Night. Rock ‘N’ Roll Party Queen. This is junk. And yet they persevere.

The highlight of this stimulating, perplexing and ultimately recommended evening is a number that may or may not have been in the movie. One of the gang members describes the thrill of mooning his teacher from the window of passing car. Kimberly Larson and Chirag Naik elicit robust applause with their number that ends with a tongue-in-cheek exclamation, “There’s a moon out tonight.”

Combining coupledom chemistry and singing talent is no mean feat. Whether you are adroitly faking it or really feeling it, it requires a level of commitment that an audience immediately comprehends. I was never bored watching The Original Grease. I was continuously curious.

PHOTO CAPTION: Jan (Kimberly Larson) and Roger (Chirag Naik) in the Studio 58 production of The Original Grease, on stage thru February 23.