When Irish eyes are crying 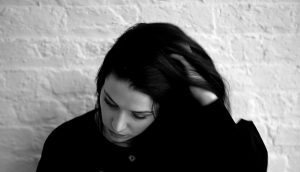 Even when a PuSh show doesn’t entirely hit the mark, it will invariably generate an interesting conversation.

In her one-woman show, I’m Not Here, Irish actor/writer/director/designer Doireann Coady has lost her brother Donal to suicide; he hanged himself over three thousand days earlier. I’m Not Here is a desperate and physically exhausting attempt to communalize her grief.

For those who have lost someone dear to a suicide, the ‘Rules for the Audience’ one-sheet, culminating in a phone number for crisis counseling, could well be pertinent. Obviously, suicide is an under-discussed subject, beyond CBC coverage of tragedies among young people in northern communities, so those people in the audience who are still mystified and shaken by a suicide in their lives could likely be more responsive to I’m Not Here, as a healing ceremony to put pain into the open, than those of us who have not. 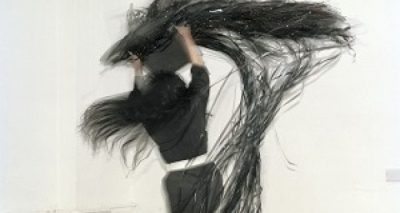 But for the most part this 70-minute performance piece—there’s not much of a plot—is more perplexing than it is transformative. Her brother was a dee-jay/mix artist so a very loud soundtrack throughout becomes problematic. We cannot always hear Coady’s lovely Irish accent over the booming soundscape. It’s a short run and this production didn’t get the levels right. Coady’s fractured monologue gives us clues about the tragedy—how two policemen found him hanging, etc.—but too much of the time we are straining to listen.

At the outset there is a male voice-over to generate the conceit that we are preparing for a show—her brother’s mix tape?—and a stage assistant is forever moving chairs hither and yon. Eventually, she removes the chairs from the audience members in the front row, all of whom are Vancouverites too polite to say no—and so they are forced to stand to witness the culmination of the show.

A plastic chair is hung on a rope, to represent Coady’s brother, and she keeps it spinning. All of which is no doubt deeply moving to the performer, whose sincerity cannot be questioned, but an objective director/editor could easily trim ten or fifteen minutes from I’m Not Here and we’d be far more inclined to be galvanized.

When a priest or a church minister drones on too long during a funeral, speaking about someone they did not know well, or did not know at all, we obediently endure it. It’s an exercise in respectful but also conformist obedience.

Ironically, as an intended antidote to such staid oratory, as an attempt to delve much deeper into the pain rather than glide over it, I’m Not Here also feels like an endurance test, a different kind of exercise in respectful but also conformist obedience.

The Irish, famous for their wakes, like the Jews, have centuries-old traditions whereby grief is shared, communalized. But we live in a very bizarre place on the planet. Here grief is privatized. Vancouver itself is such a disparate melting pot of people from different cultures that we are generally incapable of expressing and delving into communalized emotions.

You could argue that our society was able to ‘come together’ over the much-hyped Winter Olympics, or that about a million people actually grieve collectively over the chronically feckless Canucks hockey team, but Doireann Coady is boldly asking for, and hoping to incite, collective compassion culminating in a physical response regarding the suicide of her brother in particular (rather than all suicides in general).

Vancouver, according to a recent study, is actually one of the loneliest places on the planet. The percentage of people who live alone is ascending. We are a fractured, splintered, multi-lingual, a-historical blend of strangers. For relative newbies in a very immature society; death here is the private reserve of families.

To literally make a show of grief is for older cultures.