What rhymes with alma mater? 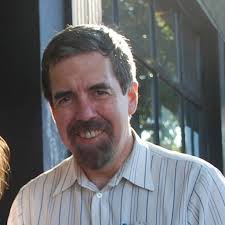 The Hundred-Year Trek: A History of Student Life at UBC

by Sheldon Goldfarb, with a preface by the Right Honourable Kim Campbell 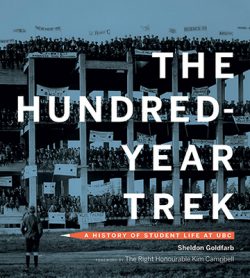 When UBC, then situated in a few buildings at Vancouver General Hospital, opened its doors in 1915, fewer than 400 students registered, a number inflated by the inclusion of some who could not attend because of battlefield duties in Europe. Today, over 50,000 students call UBC their alma mater and pay student fees to the Alma Mater Society. Some may be unsure of its pronunciation: as Sheldon Goldfarb notes poetically at the beginning of The Hundred-Year Trek, his history of student life at UBC Vancouver,

Now, would you say that Alma Mater
Rhymes with “Later, alligator”?
Or should we seek a rhyme with otter
When pronouncing Alma Mater?

For most UBC-ers, whether in 1915 or today, the solution has been to avoid the problem altogether by using the initialism “AMS”. It was to celebrate the centenary of UBC’s student society that The Hundred-Year Trek was produced, and the result is a lively and well-illustrated year-by-year account of student activity, centred on the politics and personalities of the AMS and drawn largely from the pages of its house organ, the Ubyssey (“Decaying slowly since 1918” as the paper wryly described itself in a recent masthead). 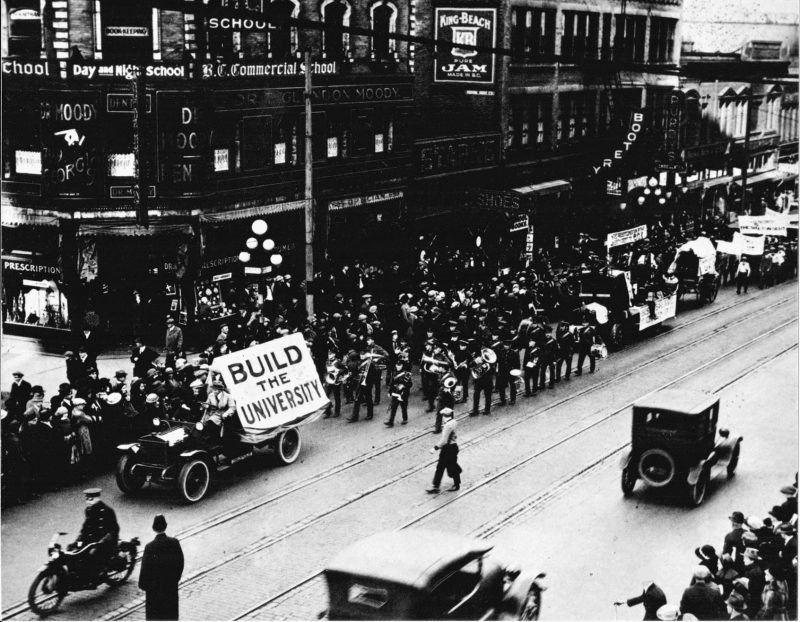 Here the reader will find brief but pithy descriptions of most of the events that have affected students on the Point Grey campus, from the silly to the deadly serious. Early days at UBC were taken up with questions of existence and identity: would the fledgling university find a permanent home? Would it survive the great depression? The text and pictures for 1922 remind us about the Great Trek, or “The Pilgrimage” as it was then called, that led over a thousand UBC students to make the journey from downtown Vancouver to the bare fields of Point Grey in an ultimately successful drive to force the government of the day to fulfil its promise of giving UBC a new campus.

Goldfarb goes on to describe how, ten years later, UBC students found themselves organizing again, this time to meet the threat of closure posed by a government making drastic budget cuts in the face of downward economic pressures. Their action is commemorated in The Hundred-Year Trek by a picture of the students’ meeting in the Auditorium, where they are caught standing in stiff and solemn array for the camera’s benefit, suggesting a degree of formality not often found at UBC, then or now. 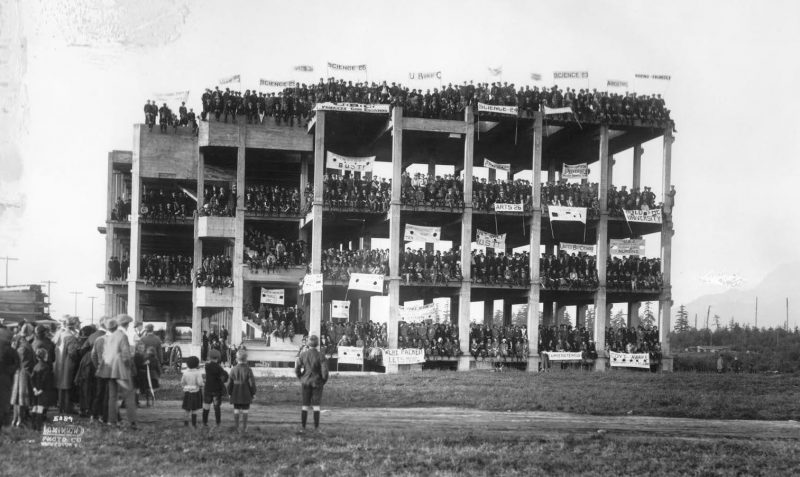 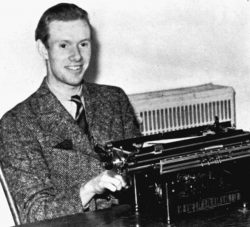 Goldfarb vividly captures many other such signal events in UBC’s history, including the completion in 1940 of Brock Hall, the first student union building at UBC; the “Back Mac” campaign of 1963 which saw students enthusiastically supporting President John B. Macdonald’s proposals for educational reform in the province; the invasion of the Faculty Club led by Yippie leader Jerry Rubin in 1968; and rounding off the twentieth century, “Sergeant Pepper” and the student protest against the meeting of APEC leaders on the campus in 1997.

A common theme that emerges from these and similar episodes recorded in the book is the persistence of activism among UBC students: sometimes political in nature (though UBC is by and large a rather conservative campus), but more often in the form of their involvement in the growth of the campus itself. Brock Hall, the War Memorial Gym, SUB, the Nest — these and other student-oriented buildings have arisen thanks to planning and financial investment by the students themselves, who can rightly claim to have helped shape what is undoubtedly one of the most impressive university campuses in the country. 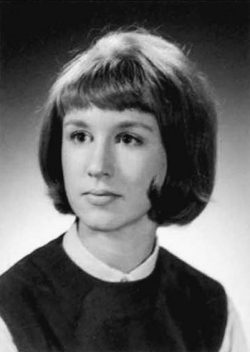 UBC has been a “fostering mother” to many Canadians who in one way or another have subsequently made a name for themselves, and whose familiar faces are scattered throughout these pages, among them politicians Pat McGeer, John Turner, Kim Campbell, and Svend Robinson.

Today we honour such figures for their remarkable contributions to public life; as students, however, they were well-known for other reasons — McGeer as a star basket-ball player, for instance (he was in the UBC team that beat the Harlem Globetrotters in 1946), or Campbell as the “cuddlier” candidate for frosh president of the AMS in 1964.

Campbell, who would become a provincial minister and then Prime Minister of Canada, speaks in her preface to The Hundred-Year Trek about “how young we were then and how much I, at least, had still to learn!” Goldfarb reminds us that Campbell’s preparation for her later career in politics included being kidnapped by the Engineers and hoisted into a tree.

Svend Robinson, described in the pages for 1973 to 1974 as “the new voice of the left” is depicted in a photograph that shows him adorned with bigger hair than Dolly Parton’s, a fashion thankfully consigned to the pages of history. 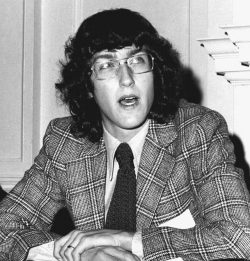 This is a perfect book to dip into, with snapshot commentaries on a multitude of events in any given year, presented with a concise wit that makes even AMS politics appear interesting. Such an approach is open to criticism, of course, in that the serious and the trivial sit side by side and may seem to be given equal importance. But Sheldon Goldfarb succeeds in setting student activism into a wider perspective of the political and social movements that have impacted UBC policies and the minutiae of student life, among them two world wars, the depression, the rise of feminism, and changing attitudes towards First Nations and visible minorities.

The Hundred-Year Trek is more than a history of UBC: in some ways it’s a history of modern times, reflected in the words and deeds of young people who were shaped by their education, and in turn graduated to become the movers and shakers themselves. 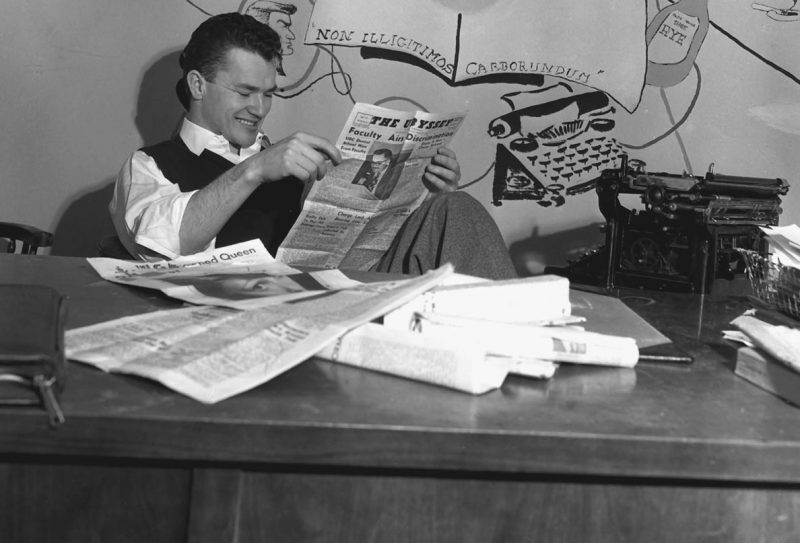 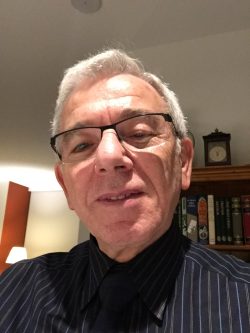 Herbert Rosengarten taught in the English Department at the University of British Columbia in Vancouver for many years, then switched to administration as Executive Director of the UBC President’s Office until his retirement. His publications include several literature anthologies and a history of UBC, co-written with Eric Damer: UBC: The First 100 Years (UBC, 2009). He edited or co-edited a number of the Brontë novels – Villette, Shirley, The Professor, and The Tenant of Wildfell Hall — for Oxford University Press, and contributed to The Oxford Companion to the Brontës (2003). His most recent publication is a chapter on Charlotte Brontë’s novel Shirley in Time, Space, and Place in Charlotte Brontë, ed. Hoeveler and Morse (Routledge, 2017). He is Past President and Program Chair of the Vancouver Institute, and chairs the Legacy Project, which gathers materials about the history of UBC in the form of video interviews, books, and other memorabilia (http://legacies.alumni.ubc.ca/). In 2016 he received the Honorary Alumnus Award from the UBC Alumni Association. 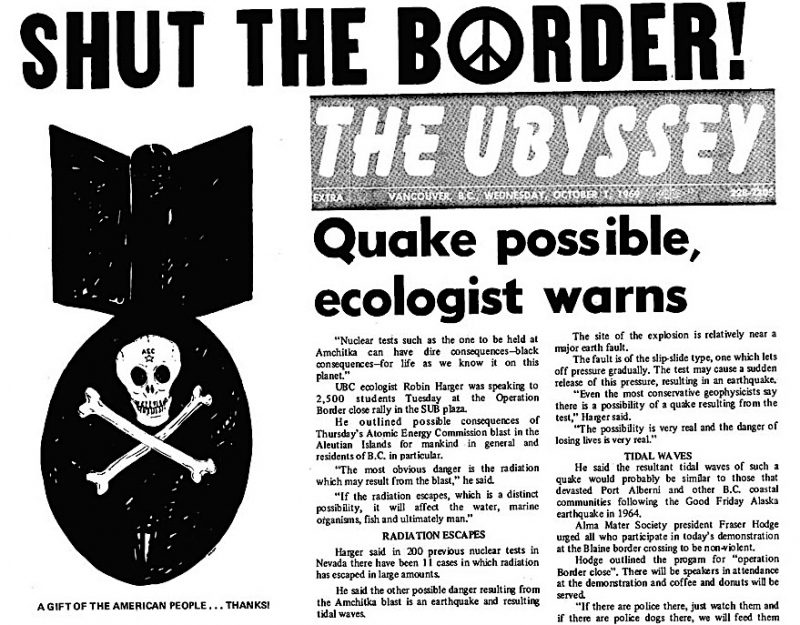 The Ubyssey, October 1 1969, a day before the American nuclear detonation at Amchitka, Alaska. The Don’t Make a Wave Committee, which became Greenpeace, was formed in Vancouver a few days later 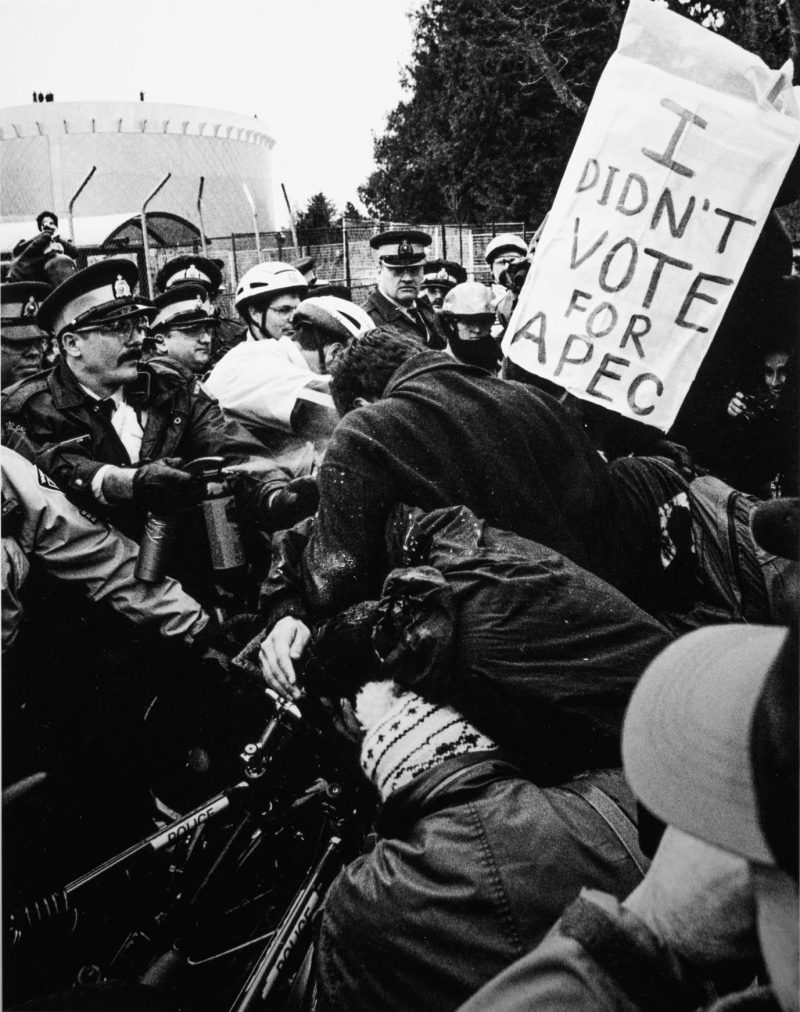 APEC demonstrators get pepper sprayed by the RCMP on Main Mall at UBC, 1997. Photo by Richard Lam, The Ubyssey