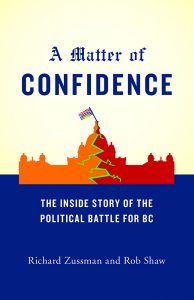 On a day when Green Party leader Andrew Weaver soundly criticized Premier John Horgan for drumming up business for the province’s languishing LNG industry, threatening to bring down their alliance and force an election if Horgan doesn’t respect the Green Party agenda, has come news about a new book to examine the current NDP/Green provincial government.

A Matter of Confidence: The Inside Story of the Political Battle for BC, (Heritage $22.95) by B.C. legislative reporters Richard Zussman and Rob Shaw, is slated for delivery to bookstores on March 20—less than a year after the May 9th election.

Possibly this incisive study of how exactly the power-sharing accord between the NDP and BC Green Party evolved will have some effect on further de-stabilizing what increasingly appears to be an uneasy alliance. 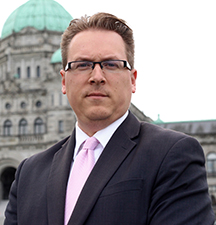 Zussman and Shaw have reportedly conducted interviews with more than seventy political insiders including Horgan, Weaver and former Premier Christy Clark—who suggested it was a time for everyone to forego their differences and work together when the future of the province was in limbo, only to promptly quit the scene as soon as she realized she could no longer play top dog.

“A Matter of Confidence gives readers an insider’s look at the over-confidence that fuelled the rise and fall of Christy Clark’s premiership and the historic non-confidence vote that toppled the BC Liberal government after a sixteen-year reign,” says Shaw, who covers provincial politics for the Vancouver Sun. 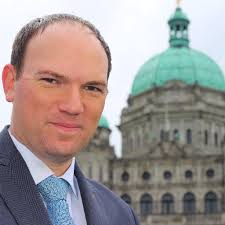 There’s another sub-plot that could provide momentum for the book. Last fall co-author Richard Zussman was surprisingly fired by the CBC for announcing he was writing the book while under the employ of the Mother Corp.

Premier John Horgan was among the many who defended Zussman’s rights for free speech, calling him an “outstanding young journalist in a sea of cynicism” and “a breath of fresh air.”

The Globe and Mail’s Gary Mason chimed in, saying, “If I was a journalist working at the CBC, I’d be furious and asking a lot of questions about what has happened here.”

The matter is currently being reviewed by an arbitrator. Countless CBC personalities have written and published books while employed—from Peter Gzowski nationally to Mark Forsythe provincially.

“Rob and Richard are the future of legislative reporting in this province,” says publisher Rodger Touchie, “and the quality of their journalism will shine through to all who read A Matter of Confidence.” 9781772032543.