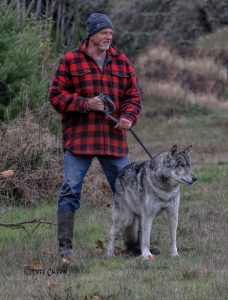 The owner of SWELL Wolf Education Centre in Nanaimo, Gary R. Allan has penned a book about his wolf dog, Tundra – A Gift from the Creator (self-published $20). Allan adopted Tundra, estimated to be 90 per cent wolf, when she was a few weeks old. That was 13 years ago. Inspired by his love for Tundra, he founded SWELL and began educating students and adults about the importance of wolves in maintaining healthy ecosystems. He has traveled to more than 200 schools, showing Tundra to students to give them a first-hand look at the animal. He has learned how important wolves are to aboriginal people and tells of the many First Nation people who have interacted with Tundra and later say that she could be their grandmother or grandfather. Chimpanzee activist, Dr. Jane Goodall has also met Tundra. Allan’s book is a collection of such stories about Tundra and the people who have encountered her. “I hope readers learn about a completely different side of the wolf from our book,” he says. “Because we as humans can learn so much good from wolves.” Importantly, he pointedly does not recommend wolf dogs as pets, “because they are not pets.” 9781771368377