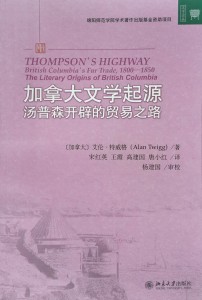 Two more volumes in the series about the literary origins of British Columbia will also be published.

Alan Twigg’s third volume of illustrated B.C. literary history traces the writing and lives of David Thompson, Alexander Mackenzie, Simon Fraser and their peers–mainly Scots–who founded more than fifty forts west of the Rockies prior to 1850. Thompson’s Highway: British Columbia’s Fur Trade, 1800-1850 (Ronsdale $24.95) presents Thompson as the hero of his era, the man who identified the Columbia River as the “highway” for commerce on the Western Slope, and who opened the route over the Rockies to connect East and West. Here is a review of Thompson’s Highway by George Fetherling that first appeared in Georgia Straight.

First Invaders (2004) and Aboriginality (2005) dealt with Native cultures and were called volumes 1 and 2 of The Literary Origins of British Columbia. For some reason, the latest installment, Thompson’s Highway: British Columbia’s Fur Trade, 1800–1850 drops the umbrella title and gives no hint of how long the whole project will be. My guess is that it’s open-ended, without a timetable or schematic. My other guess is that, although the individual volumes so far have been far more praised than damned, Twigg must wait until the scheme’s conclusion before the majority of people see how ambitious it really is, and how sweeping.

Twigg writes about three dozen trappers, traders, explorers, adventurers, scientists, and artists connected in some way to the Hudson’s Bay Company and its rivals. No surprise that the best known are the ones who wrote or at least published the most, such as Sir James Douglas, a tireless correspondent and writer of dispatches, and Alexander Mackenzie, whose book Voyages From Montreal (1801) was probably ghosted by his cousin Roderic. One of Twigg’s themes is that the Highlanders and Orkneymen who dominated both the HBC and the future B.C. were driven here by Scottish poverty and clannishness–to which I would add by the snobbery of the English who found them pretty rough round the edges. His other message is that violence between whites and Natives was more common than we believe, and that whites “tended to overlook or diminish acts of barbarism or cruelty” that they had perpetrated.

These curiously indexless books have all the virtues of Twigg’s magazine, BC BookWorld. They are lively and energetic, slangy and accessible, and well informed in an autodidactic way, if also now and then a trifle careless. (The American fur trader John Jacob Astor could not have died on the Titanic, as Twigg states. Born in 1763, he would have been 149 at the time. John Jacob Astor IV was the unfortunate passenger.)

Logically, the next book will be on the gold rushes of the 1850s and ’60s, when the boom attracted professional writers like Donald Fraser, Kinahan Cornwallis, and Amor De Cosmos. If it’s like the three so far, it will continue to show Twigg’s membership in the noble tradition of populist educators.