The poet beats the lawyer 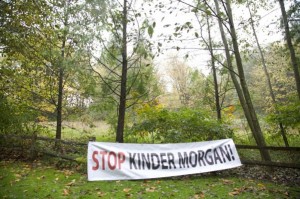 But literature scored a victory over law recently on Burnaby Mountain.

Poet and professor Stephen Collis was front and centre during recent Burnaby Mountain protests as a spokesperson for the land defenders who disrupted survey work by Kinder Morgan to combat a proposed second Kinder Morgan Trans Mountain pipeline.

After Kinder Morgan served the obstructionists with a $5.6 million dollar lawsuit, a legal defence fund was created to support the legal costs for Collis, Adam Gold, Mia Nissen and Lynne Quarmby, among others, who defended their rights to protest in hearings held November 5-7 at the Supreme Court of B.C. Stephen Collis’ next book will be called Reading Wordsworth in the Tar Sands, due next year.

A lawyer for Kinder Morgan read some of Collis’ writing into the public record. It was a prose piece called The Last Barrel of Oil on Burnaby Mountain from Collis’ blog post. “He introduced it in court,” says Collis, “as evidence of my guilt as someone intending to blockade their pipeline, and encouraging others to do so as well. He referred to it as a ‘poem by Stephen Collis.’ I can only assume that the literary structure of the sentences led him to re-brand it as a poem!”

Collis & Co. eventually “won” this environmental battle after it was discovered Kinder Morgan had given the RCMP incorrect GPS coordinates so that the invisible “line” that protesters were not supposed to cross was nowhere near where it was meant to be. The judge threw out all the charges and refused to give Kinder Morgan an extension for their drilling. The U.S.-based Kinder Morgan cut its losses and hurriedly helicoptered out all its exploratory drilling equipment.

There is already one pipeline that brings tar-sands bitumen to the port of Vancouver. “Twinning” with a second tunnel could triple the amount of bitumen shipped through Vancouver by Kinder Morgan.

“We are at a point in history,” says Collis, “when people have to stand up for what they believe, and stand up to defend their local environments, and the global environment, too. I’m glad that is what we did in this case, but I also know we will have to do this again before long.”