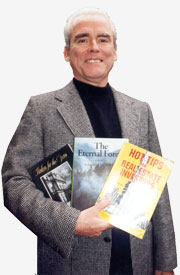 With a Ph.D in Romance languages from Yale, Robert Thomson of Victoria is also the publisher of two books by his great-uncle George Godwin, a British novelist who lived in Whonnock, B.C. for several years in the early 20th century and wrote a novel based on his life as an English immigrant. Thomson has also made a third book by Godwin available via his internet site.A former professor or Romance languages, Thomson has also written and published Multi-Sensory, Audio-Visual Teaching for the Language Arts: How to Integrate Songs, Musicals, Movies, and Magazines into Your Program of English Language and Literature. (Godwin 2003). Earlier he wrote and self-published a grammar of operatic Italian entitled Italian for the Opera (1992). It was followed by Operatic Italian (Godwin Books 2008), a work on the same subject, but three times longer.
Now Robert Thomson has turned his facility for languages into an instructional approach to learnnig Spanish via music.Here is his preface for Learn Spanish with Love Songs (Godwin Books 2014)
—
This book will familiarize you in depth with twelve very beautiful Latin-American love songs. They have been carefully chosen for their artistic merit and the variety of cultures and themes which they explore.

I live in Victoria, BC, Canada and there a many people here who travel regularly to Mexico. Quite a few of them want to learn Spanish and when they ask me for advice I say to them:

•    Work with audio-visual methods as much as you can. Don’t count on night courses, etc. for a quick fix.
•    Read a good grammar book and refer to it when you need to, but above all, find well-designed audio-visual material.
•    The “Destinos” DVD  is, in my opinion, one of the best programs for watching at home.
•     A  CD package such as the Berlitz CDs is one of the best programs to listen to while driving. I learned a lot of Spanish listening (and repeating after the speaker) on a long commute back in the 1980s. On one trip I got so engrossed in repeating phrases that I missed my turn-off  on the highway and was twenty minutes late for work!   I am very grateful to those Berlitz cassettes for showing me the right path.  I hate wasting my time. Nowadays when asked where I learned Spanish, I say “en mi coche, con la grabadora (in my car, with a cassette recorder). I get some strange looks.

I find it surprising that people take a few evening courses (which usually don’t afford much time for working or the oral/aural aspect of learning) and wonder why they don’t have a good accent.  They need to accept the fact that you can only acquire a good accent by spending a lot of time repeating things in the target language. Repeating, out loud, over and over and over and trying to monitor and improve your own performance.

The songs in this book work in the same way as the CDs and DVDs: if you listen to them over and over and sing along with them (always trying to improve your imitation) you will certainly acquire good pronunciation and rhythm and in the process you will learn a lot about word meanings, idioms, verb tenses, grammar and the background culture (so important!).

I have chosen songs twelve songs for you to learn from. They have been carefully selected  because they go straight to the heart.  They have beauty, originality, and show many varieties of that divine madness called “love”  There are rhumbas (Noche de Ronda, Siboney, Quizás? Quizás?), tangos (Caminito), ranchero songs (Miraron llorar a este hombre), and even Viennese waltzes (Cielito Lindo). They cover a gamut of four countries: Mexico, Panama, Argentina, and Venezuela. I think it is a shame that tourists to Mexico are bombarded relentlessly with La Bamba and Guantanamera and I will be very happy if this book plays a part in gaining more exposure for the kinds of songs that I have included here. I will also be pleased if people who first discovered these songs in their English version see clearly that the English version is usually a bland dish of blancmange when compared with the Spanish original.

The recording artists which I prefer are Eydie Gormé, Lola Beltran, Vicente Fernandez and Plácido Domingo but I offer them only as suggestions. They may not be your favorites so search Youtube and see what comes up. I should also mention that the twelve songs gradually increase in complexity so you are not thrown in over your head. I recommend frequent reviews of those songs which you have already studied.

Having searched the internet many times for the Spanish words to these songs I have concluded that most versions are unreliable and that people would welcome an accurate version. This is one of the reasons why I wrote this book.

See my site: www.godwinbooks.com for my writings, especially those which involve studying songs and opera:

One Response to “Learn Spanish with Love Songs”