This Airplane Can Dance 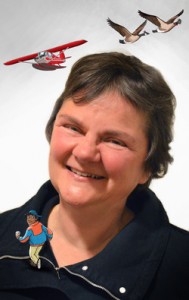 In May of 2014, Danielle Marcotte attended the Salon du Livre de l’Abitibi-Témiscamingue in her hometown of Amos, in Québec. Amos was celebrating its 100th birthday. Her grandparents were amongst its pioneers. Also in 2014, English versions of her three children’s books were made available for the first at bookstores in B.C., all newly published by Midtown Press, an imprint operated by former publishers’ sales representative Louis Anctil. Inspired by her son’s piloting adventures and her daughter’s artistic output, Marcotte writes adventure stories about dogs and planes for a 6-to-10-year-old audience. These have now been published in both of Canada’s official languages. For 30 years, Danielle Marcotte worked as a radio host for Radio-Canada, interviewing artists, political figures and ordinary citizens from all walks of life. Now retired, she has put down roots in Tsawwassen, B.C. where she continues to write for both French and English newspaper and magazines. BOOKS:  Scamper and the Airplane Thief — Book 1 (Midtown Press/Sandhill 2014) $6.95 978-0-9881101-3-7 / This Airplane Can Dance — Book 2 (Midtown Press/ Sandhill 2014) $6.95 978-0-9881101-4-4 / Why Does My Dog Smile? (Midtown Press/ Sandhill 2014) $5.95 978-0-9881101-5-1