The prime of Ms. Jean Barman

As someone who encourages minorities to record their histories, Jean Barman will be honoured at the 10th annual Chinese Canadian Historical Society of B.C. banquet. 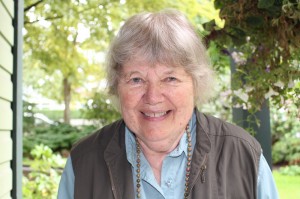 Jean Barman's 22 books include a new history or French Canadians and indigenous women in B.C.

Jean Barman, recipient of the George Woodcock Lifetime Award in 2014, will be celebrated on Saturday, April 11, in Vancouver.

The dinner for Jean Barman, open to the public, will be held at the Fraser Court Restaurant at 3489 Fraser Street in Vancouver. [photo of Jean Barman by Larry Wong]

Jean Barman is a founding director of the CCHS and an acknowledged expert on B.C. history, having written or edited 21 books, including The West Beyond the West: A History of British Columbia (3rd ed. Toronto: University of Toronto Press, 2007, orig., 1991), now generally used as the foremost history of the province.

Jean Barman’s latest book is French Canadians, Furs, and Indigenous Women in the Making of the Pacific Northwest  (UBC Press). This unprecedented overview, greatly benefitted by the spadework of fur trade historian Bruce McIntyre Watson, has been recently selected as one of three shortlisted titles for the third annual Basil Stuart-Stubbs Prize for best academic book about B.C.

Alexander Mackenzie has long been identified in school books as the first non-Aboriginal to traverse the North American continent, from east to west, in 1793.

Mackenzie famously reached the coastline, near Bella Coola, on July 22nd, leaving a message on a rock with a mixture of vermillion and melted grease.

By the time the bold Scot (“the northern Sinbad”) had departed from Fort Chipewyan in northern Alberta and journeyed overland and back, he’d covered a distance of 2,300 miles.

Mackenzie was knighted almost immediately. He had his portrait painted by a leading artist. He became rich. At age 50, he married his 14-year-old cousin. Hardly anyone to this day knows the extent to which Mackenzie and his second-in-command Alexander MacKay depended on indigenous interpreters and six French Candian paddlers under the employ of the NorthWest Company who essentially did most of the work. Their names are Jacques Beauchamp, Francois Beaulieu, Baptiste Bisson, Francois Courtois, Charles Ducette and Joseph Landry.

Mackenzie’s account does not distinguish between the six men. “Only twice during the course of the trip,” Barman writes, as ‘with these persons I embarked’ and when one of them momentarily rebelled, did Mackenzie acknowledge all or any of the men by name.”

Similarly, all nineteen of the ‘common men’ whose names survive from Simon Fraser’s journal were described as “Frenchmen.” According to Barman, only one of these nineteen men can be identified with any certainty. That was Jean Baptiste Boucher who became the earliest ‘not wholly indigenous person’ known to engage in family life in the Pacific Northwest.

Jules Maurice Quesnel was an exceptional Francophone officer on Simon Fraser’s journey who stayed in the Pacific Northwest until 1811. The town of Quesnel now bears his name, but his case is an anomaly.

Hardly anyone realizes it, and nobody has made it public knowledge, but for half-a-century French Canadians were the largest group of newcomers west of the Rockies.

Ironically, in a place later to be called British Columbia, it was mainly francophones who facilitated the early overland crossings into the Pacific Northwest and so it was francophones who chiefly drove the fur economy, as well as initiating non-wholly-indigenous agricultural settlement and easing relations with indigenous peoples.

Over half of the 1,240 French Canadians who reached the Pacific Northwest as fur trade employees prior to 1858 opted to stay on the western side of the Rockies.

The largely unsung work of these men–often in league with Scots–ensured that, when the region was divided in 1846, the northern half would go to Britain, giving Canada its Pacific shoreline.

In Jean Barman’s ground-breaking French Canadians, Furs, and Indigenous Women in the Making of the Pacific Northwest (UBC Press 2014), she rewrites the early history of the Pacific Northwest from the perspective of these little-known French Canadians, emphasizing the role that indigenous women played in encouraging them to stay, and identifying some of their descendants.

Barman clearly acknowledges the meticulous primary research of the fur trade undertaken by Bruce McIntyre Watson that resulted in the publication of his three-volume Lives Lives West of the Divide: A Biographical Dictionary of Fur Traders Working West of the Rockies, 1793-1858. Twenty years in the making, Bruce McIntyre Watson’s massive, three-volume compendium has been made available electronically in conjunction with the Centre for Social, Spatial, and Economic Justice, an academic research centre located on the University of British Columbia’s Okanagan campus. It records the lives of more than 3,500 individuals of all backgrounds from northern B.C. to southern Oregon.

Watson and Barman jointly received a Social Sciences and Humanities Research Grant that facilitated their books.

As well, Barman was greatly assisted by Nicole St.-Onge who made available her Voyageurs Contracts Database, which contains 36,000 individual fur trading contracts signed before notaries, principally in Montreal, between 1714 and 1830.

“Jean Barman has devoted her life to uncovering the untold stories that conventional historians have overlooked.” —BC Bookworld

“This is a massive narrative undertaking by a historian at the height of her powers.” —Heather Devine, BC Studies

“This tour de force charts in both broad strokes and careful detail the impact of French Canadian men and their Aboriginal wives and families.” —Carolyn Podruchny, author of Making the Voyageur World

“History is usually written by the winners. Their lives comprise the archival collections, and historically these have been white men enjoying political and economic privilege. So long as we rely on the materials at hand, we keep telling the same old stories.” — Jean Barman (BCBW, Volume 23, No 3, Autumn 2007)

Jean Barman is the 21st recipient of the George Woodcock Lifetime Achievement Award for an outstanding literary career in British Columbia.

Since her arrival in B.C. in 1971, Jean Barman has become one of the most essential writers of the province, contributing The West Beyond The West: A History of British Columbia (1991). As one of the few comprehensive, modern histories of the province, it has mostly replaced Margaret Ormsby’s work as the standard text on the subject. In much of her work Barman has shown a predilection to examine the lives of women. Her biography of Constance Lindsay Skinner recalls the prolific journalist, born in B.C. in 1877, who managed to produce a wide range of poetry, plays, short stories, histories, reviews and children’s novels. [See Skinner entry] Sojourning Sisters, for which she received the Lieutenant Governor’s Medal for historical writing, recalls the lives of two Scottish Presbyterian sisters who came from Nova Scotia in the late 1880s to teach. Because one of the sisters subsequently lived primarily in Ontario, they wrote more than 500 letters about their ‘sojourns’ that included stints in the Nicola Valley, Kamloops, Campbell Creek, Salmon Arm, Rossland, the Kootenays, Saltspring Island and Victoria. Barman has also paid tribute to the working class family of Portuguese Joe Silvey and the half-Hawaiian matriarch Mariah Mahoi, followed by Stanley Park’s Secret: Forgotten Families of Whoi Whoi, Kanaka Ranch, and Brockton Point (Harbour, 2005), a second volume that recovers the Hawaiian heritage of Canada’s West Coast. It was co-winner of the 2006 City of Vancouver Book Award. BC 150 Years (Harbour 2008) was nominated for the BC Booksellers’ Choice Award in Honour of Bill Duthie.

A UBC historian in the Department of Educational Studies, Jean Barman was born in Stephen, Minnesota. In keeping with her position in the Education department at UBC, her first book about B.C. was Growing Up British in British Columbia: Boys in Private School. She also co-edited Vancouver Past: Essays in Social History with UBC history professor Robert A.J. McDonald; Indian Education in Canada, with Don McCaskill and Yvonne Hebert; and First Nations Education in Canada: The Circle Unfolds, with Marie Battiste, a member of the Mi’kmaq Nation. Active in the B.C. Heritage Trust and other historical organizations, she has been a catalyst for countless literary and historical projects by others, adding both intellectual input and generous advice. With Linda Hale she co-produced a 1991 bibliography of B.C.’s local history books for B.C. Heritage Trust which included 800 communities. Jean Barman was inducted as a Fellow of the Royal Society of Canada in 2002, in recognition for her prolific work in Canadian history, particularly in the history of the West. She is married to historian Roderick Barman. They live in Vancouver.

Review of the author’s work by BC Studies:
British Columbia: Spirit of the People
Children, Teachers and Schools in the History of British Columbia
Constance Lindsay Skinner: Writing on the Frontier
Growing Up British in British Columbia: Boys in Private School
Indian Education in Canada. Volume 1: The Legacy
Indigenous Women and Feminism: Politics, Activism, Culture
Leaving Paradise: Indigenous Hawaiians in the Pacific Northwest, 1787-1898
Maria Mahoi of the Islands & The Remarkable Adventures of Portuguese Joe Silvey
Sojourning Sisters: The Lives and Letters of Jessie and Annie McQueen
Stanley Park’s Secret: The Forgotten Families of Whoi Whoi, Kanaka Ranch and Brockton Point

French Canadians, Furs, and Indigenous Women in the Making of the Pacific Northwest (UBC Press 2014)

Sojourning Sisters: The Lives and Letters of Jessie and Annie McQueen (Toronto: University of Toronto Press, 2003)

The West Beyond the West: A History of British Columbia (Revised edition. Toronto: University of Toronto Press, 1996, orig., 1991)

Edited with Neil Sutherland and J. Donald Wilson, Children, Teachers and Schools in the History of British Columbia (Calgary: Detselig, 1995)

Edited with Yvonne Hébert and Don McCaskill, Indian Education in Canada. Vol l: The Legacy and vol. 2: The Challenge. Vancouver: UBC Press, 1986 and 1987. One Response to “The prime of Ms. Jean Barman”