The Art of Arthur 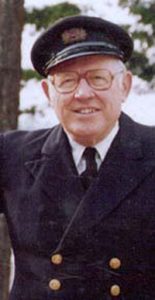 Arthur (Art) Maitland Twigg was a proud British Columbian who self-published a hardcover history called Union Steamships Remembered 1920-1958, a compilation of text and photos, with cover art by Michael Dean, that was launched at the Vancouver Maritime Museum in 1997. Now out of print, it focussed on ships and personnel of ‘the lifeline of the coast’, the Union Steamship Company.

The ART of ART is an exhibition of artworks by Arthur M. Twigg, curated and presented by his eldest son, John Twigg, at Campbell River in 2017.

Beginning on Sunday Jan. 1 at 1 p.m. to 4 p.m. a business space temporarily dubbed Twigg’s Gallery in the Campbellton district of Campbell River will be opening and displaying an art exhibit on the history and well-lived life of Arthur Maitland Twigg.

It includes profiles of his family history, his interesting careers in sports and business and especially it features output from his several hobbies, notably paintings, carvings and sculptures plus items related to the writing of his successfully self-published hardcover book Union Steamships Remembered and other writings as well as his painted portrait of the Duke of Wellington and items from his large collection of memorabilia related to “the great Duke’s” role in the history-changing Battle of Waterloo.

The exhibit space is located at 1631B Island Highway (a separate entrance in the Mackie Research Capital Corp. building) and will be open throughout January mainly by appointment but also occasionally on weekday afternoons and weekends as conditions permit and demand may warrant.

For information please contact John Twigg at john@johntwigg.com or 778-348-0747.

Arthur Maitland Twigg was born April 25, 1923 in North Vancouver, the only child of Harry Maitland and Rubina Olive Twigg. He grew up in West Vancouver, first in a small waterfront house in the Ambleside area near the mouth of the Capilano River long before the Lions Gate Bridge was built. and later in a series of other houses in West Vancouver including one owned by his maternal grandmother Isabelle (Judy) Grant.

His father, the son of a Victoria typographer, was an accomplished outdoors writer specializing in fishing columns but also tying flies, writing poetry and later managing newspaper circulation in West Vancouver. His mother was born in Southampton, England but at a young age came to Canada with her mother and grandmother, first to Saskatoon then Vancouver where she met her husband after taking a liking to his talent at writing letters to a friend. They homesteaded to a wooded waterfront lot at Oyster Bay (south of Campbell River) and built a cabin there in 1940.

Living and working on or near the sea became a lifelong habit for Arthur in both West Vancouver and later on the Oyster Bay property where he helped his parents build their home and in 1974 took early retirement to a home he built himself there while still in his fifties.  His early career was as a purser with Union Steamships and later in his life he wrote and successfully self-published the book called Union Steamships Remembered, and that book and his original uniform are now displayed by the Museum at Campbell River in the Campbell River Maritime Heritage Centre.  His second career was as the Purchasing Agent for the Municipality of West Vancouver from where he became president of the Purchasing Management Association of Canada and hosted a national conference in Vancouver in 1972 (a rarity to be held away from Toronto in those days) and the exhibit includes his written columns and memorabilia from that period.

He also maintained a lifelong interest in sports, from early days playing and coaching basketball to latter years dabbling in golf despite the handicap of a knee made unbendable due to a blood-poisoning accident he incurred while an elementary school student at Hollyburn School in West Vancouver. But in retirement his first priority was to complete his history of Union Steamships and along the way and afterwards he produced numerous art works. The exhibit also includes his many works as an art student in Vancouver.

His first wife was Betty Thomson from the Patterson family of Vancouver and they had two children, John in 1949 (who at a young age became Press Secretary to B.C. Premier Dave Barrett in 1972) and Alan in 1952 (who was awarded an Order of Canada in 2015 and numerous other awards for his lifelong career in the B.C. book-publishing industry). Arthur later married Gloria Llywarch, who predeceased him, and was comforted in his final years by Judy Aylsworth.

Several of Arthur’s forebears had roles in the military services, including his father (who suffered a lifelong heart handicap while called out to clear snow in the winter of 1919), his wife Betty’s father (John Thomson,taken captive in Hong Kong in WWII), his uncle Philip Twigg from Victoria (died at Vimy at age 19) and perhaps a Major John Twigg who served in Ireland under Wellington. Though Arthur’s childhood injury precluded his own military service he later in life succeeded in persuading the Canadian Government that his service on Union Steamships in the war years as part of the Canadian Merchant Service Guild should qualify as military service because of threats from Japanese submarines and the risks of carrying overloads of military passengers along the B.C. coast. Memorabilia from all those also are in the exhibit. His paternal grandfather, Thomas H. Twigg, died prematurely in the late 1800s.

Arthur maintained a lifelong close relationship with his mother Rubina, who nursed her husband until his death in 1948 and afterwards she built a career in Campbell River with B.C. Telephone Co., the Marina Hotel and the Willow Point Old Age Pensioners group. She was integral in supporting the printing of Arthur’s book and did numerous quiet good works in the community. She also maintained an active lifestyle, still gardening and living alone in her waterfront home until a few months before her death in 2008 at age 102, out-living her beloved and loving son Arthur who died of cancer and Alzheimer’s in a Nanaimo care home on Nov. 24, 2001.