Nothing heals the body like a good meal, and nothing soothes the soul like a good story. -- Old Arabic saying 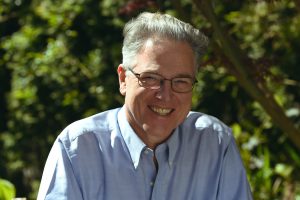 The latest title in the Fairy Tale Feasts series, in which prominent writers of diverse cultures pair tales with traditional recipes, covers Arabic cuisine and stories. 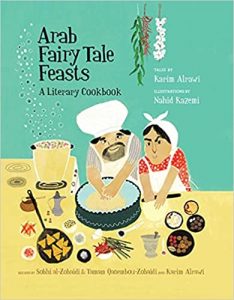 The writing of cookbooks in Arabic goes a long way back, at least a thousand years says Vancouver-based Alrawi, a playwright and novelist. “Good cookbooks were so highly regarded that one was even written by a sultan (an Arab king), Ibrahim ibn al-Mahdi, in the ninth century.”

Alrawi’s opening tale is about a mischievous girl who climbs her neighbour’s apricot tree to eat and steal some of the fruit. When she finishes filling her pockets, she realizes she can’t get down. The gardener helps her, wondering what she was doing in the tree. The girl blames a wind for blowing her up there, and the juice on her face and hands from grabbing branches to hold onto. The gardener almost catches her out when he asks why she has fruit in her pockets. “I was wondering that myself,” she replies. “Strange, the tricks the wind can play.”

The moral of this story writes Alrawi is: “The wit of the mischievous should be a warning to the wise.” He follows it with a recipe for mehallabeyat qamaruddin (apricot pudding). 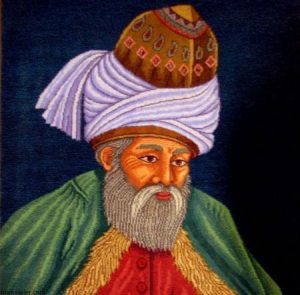 All the recipes include well-known Arabic food such as hummus, chicken kebab, tabouli and baba ghanoush. Alrawi’s anecdotes are wide-ranging and include a story about the thirteenth-century poet, Jalaluddin Rumi who wrote a number of short stories in praise of the chickpea. Rumi considered it “an everyman kind of legume: simple and straightforward, but also versatile and nourishing.”

Alrawi has won many international awards for his plays including the Samuel Becket and the John Whiting awards. His first novel won the inaugural HarperCollins Prize for Best New Fiction.

The recipes in Arab Fairy Tale Feasts are by Alrawi and Sobhi al-Zobaidi & Tamam Qanembou-Zobaidi, the latter two being the husband and wife team who established the first Palestinian restaurant in Vancouver, Tamam.

Tamam Qanembou-Zobaidi was born and raised in the Old City of Jerusalem. She studied visual arts at Al-Quds University and worked in Palestine as an actress, TV presenter and stage artist, but always had a passion for cooking. Sobhi al-Zobaidi was born and raised in Palestine and grew up in a refugee camp. His mother was from the village of Qulieh, one of many destroyed in the Nakba, and his father was from the village of Al-Safriyeh. After studying film production and cinema at New York University, Sobhi produced a number of award-winning documentaries and short films. He is also a songwriter and published essayist on Palestinian culture and art. 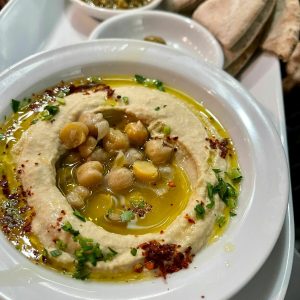 Hummus is the Arabic word for chickpeas, and it can be served as a dip with pita bread or vegetables, as an appetizer or as a side dish. Here, it is layered with garlicky yogurt. You can leave out the yogurt layer, if you like, and just use half the amount of toasted bread.

Set aside ½ cup of the chickpeas to decorate the hummus. Place

the remaining chickpeas in a food processor and add the tahini,

lemon juice, garlic and salt. Blend until you have a smooth paste.

Taste and blend in more salt, lemon juice, garlic or tahini if you like.