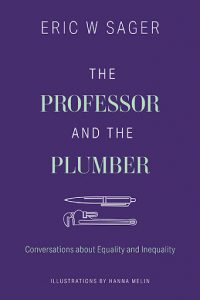 In Eric Sager’s book, The Plumber and the Professor (FriesenPress, 2021) two cousins argue about inequality over a lasagna dinner one evening. They compare a single mother living with her young son in Southern Ontario on $65 a day to an empty-nester CEO living with his wife in Toronto on $30,000 a day.

Their conversation deepens and they consider why the top 1% have so much more than the rest. They realize that this increasing inequality has created a rift amongst people, a decline in community, which is a weakening of a shared sense of responsibility. And where inequality is greatest, social cohesion is weakest.

What are the consequences?

Inequality also has an impact on the political life of a country:

So, traditional forms of political participation are at risk, and inequality gives rise to populist rage.

The two cousins eventually discuss solutions and agree on some interesting ways to fix the problems of inequality.

BCBookLook: Why did you write this book now?

Eric Sager: Is inequality a dead subject? I don’t think so! Thomas Piketty’s 700-page book, Capital in the Twenty-First Century has sold millions of copies. In the last decade there has been a flood of books on the subject. The problem, in my view, is this: most of these books are written for academics. Very few, if any, communicate basic information and ideas in language that is accessible to general readers. The Professor and the Plumber is intended to appeal to all readers. It puts ideas into a conversation between two people who know each other well, and talk comfortably with each other.

BCBookLook: What are some of the different types of inequality you address?

Eric Sager: The focus is on inequalities of income and wealth. But the point is this: these material inequalities are connected to all other inequalities and make them worse: inequalities of gender, race, opportunity, and more. And we have seen how a pandemic, and disasters induced by climate change, exacerbate inequalities. There is no escape from inequality without an inclusive understanding of equality and what we mean by equality.

BCBookLook: What are some of the main issues about equality discussed by the two cousins that relate to contemporary concerns?

Eric Sager: The two cousins try to answer some very basic questions. Does equality mean providing the same income to everybody? If not, what does it mean? Does equality mean providing equality of opportunity to everybody? Does human nature make it impossible to ensure a greater degree of equality? What exactly is equality? If there is no such thing as perfect or absolute equality, then what degree of equality do we want? The answers may surprise you!

BCBookLook: Do you provide solutions in the conversation?

Eric Sager: The book contains a summary of the main policy solutions to inequality, the solutions that have been proposed by economists and others. So far, few governments have implemented such policies, even in part. But the plumber insists, and the professor agrees, that policies are not enough. We must begin with principles, and we must seek a greater level of social agreement on some basic principles of social justice. Many of the principles discussed in the book come from philosophers, and especially from the field of distributive justice. For far too long these principles have been confined within scholarly publications. They deserve a much wider audience.

BCBookLook: What is your ideal society?

Eric Sager: The plumber and the professor will tell you! In the end they talk about the closing of social distances, and about reciprocity as the core value of community. An ideal society is one based on principles of social justice that we all know at some level, but too often fail to act upon. The ideal can only be realized out of our experience – as it is realized in the lived experience of a professor and a plumber whose relationship to each other is key to their understanding of equality.

BCBookLook: Anything else you want to add?

Eric Sager: The entire conversation is embedded in the personal relationship between two people. Why is a plumber arguing with a professor? Why does this professor say to this plumber: “You are my teacher, cousin, as much as I am yours”? There is a mystery about these two people. Their personal story is gradually revealed through the book

Author Eric Sager has taught history for nearly 50 years. His books include Inequality in Canada: The History and Politics of an Idea (2020), Seafaring Labour (1989), and Ships and Memories (1993). He lives in Victoria.

Illustrator Hanna Melin fell in love with drawing at an early age, a passion that took her to London’s Royal Academy of Art where she earned a master’s degree in visual communication. Born in Sweden, Melin lives in East London, where she works as an illustrator and designer.