Tales from an Ancient Indian feud 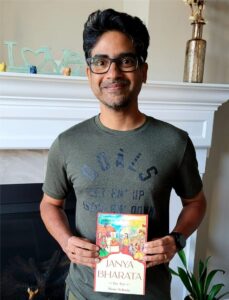 Since his childhood days in India, Manu Nellutla, who now lives in Surrey, BC has been interested in historical and mythological books. He read as much as he could about them including the two major epics in Sanskrit from Ancient India, the Mahābhārata and the Rāmāyana. It led Nellutla to begin his Janya Bharata book series. The first installment is Janya Bharata: The War: A commoner’s historical fiction during Mahābhārata epic (Self-published $14.99). Set in the mythical time of the Mahābhārata epic poem, which was probably compiled between the 7th century BCE and the 3rd century BCE, Janya Bharata is a fictional novel about a tribe called Ustrakarnikas. The protagonist, a common man named Mitrajit, is pulled into a feud between two cousin groups, the Pandavas and the Kauravas. All that Mitrajit ever wanted was to spend his life peacefully with his wife and daughter. But now he has to choose between his dharma and his family. How will this war between the Kuru royalty affect Mitrajit’s life and tribe? This novel presents a unique, never-before written perspective of what the common population across the Indian sub-continent were doing during the epic Mahābhārata’s war. Nellutla is an Indo Canadian who has lived and worked in three different continents. He can speak, read and write fluently in four languages and can speak in two other languages. Outside his professional work, Manu is also a singer, podcast host and an acclaimed public speaker including on the TEDx platform.