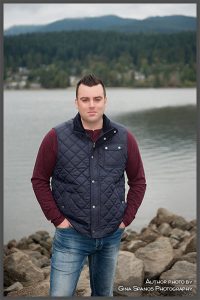 Port Moody-based A.J. Devlin is set to release the third installment in his “Hammerhead” Jed mystery series, Five Moves of Doom (NeWest $22.95) due out September 15. “Hammerhead” Jed Ounstead, the ex-wrestling pro turned detective is drawn into the mixed martial arts community when a UFC Championship belt goes missing and he’s hired to find it. He ventures into the tight-knit MMA community where he begins asking unwanted questions and infiltrates a secretive no-holds-barred fight club. Jed’s detective work also takes him inside the world of jewel thieves, bodybuilders and yoga enthusiasts. Jed, who has developed an unhealthy fondness for banana milkshakes, may be in for a fight that he is no longer fit to handle. Publicity states the book “is a high-altitude and high-attitude entry in A.J. Devlin’s award-winning mystery series, one that finds its hero pushed to his absolute limit, relying on his closest allies to survive, and making choices he never thought he’d have to make.” 978-177439-055-9