Some bare facts about self-publishing 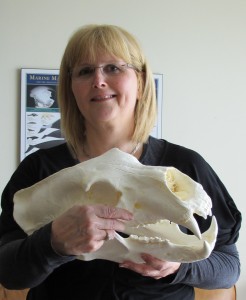 All self-publishers are not created equal–but they all face the equally difficult challenge of figuring out how the heck to go about getting their manuscript made into a viable book.

Susan J. Crockford of  Victoria has managed better than most. For starters, she is a rarity–someone who has mainly made her living off her ability and scientific technical skill for identifying animal bones for biologists and archaeologists. Crockford is not a neophyte when it comes to writing: she has travelled extensively for her work and written numerous scientific papers.

Having honed her science writing for a general audience on a blog called PolarBearScience since 2012, Crockford has now used her eclectic professional background, and her experiences as an avid fiction reader, to publish her first novel, Eaten (Createspace/Amazon 2015), described as “a polar bear attack thriller.”

In Eaten, terror reigns across the unprepared populace of northern Newfoundland in the spring of 2025 as hundreds of hungry polar bears come looking for human prey. It’s a humanitarian crisis for people as well as a wildlife crisis for the polar bears: stopping the carnage will be the biggest challenge local residents, Mounties, and biologists have ever faced. Yes, it’s easy to say Eaten is a chilly, science-based alternative to Spielberg’s Jaws.  She hopes to “generate nightmares for readers living in Ganges or Prince Rupert as in Tuktoyaktuk” by immersing her reader in the primeval fear of being eaten by a bear.

Born in Toronto in 1954, Susan J. Crockford moved to Vancouver in 1968, and settled in Victoria in 1976. She attended UBC for her B.Sc. (Zoology) and completed her Ph.D. at the University of Victoria. Here is an overview of her experiences as an indie publisher with outfits in British Columbia (Island Blue, Trafford) and in the United States (Createspace, Amazon, Smashwords).

Nowadays self-published titles such as Susan J. Crockford’s novel Eaten, about polar bears in Newfoundland, are almost as likely to be worth reading as ‘trade’ titles. So we’ve asked her to share her experiences as an indie publisher. I’ve published a couple of books at Island Blue in Victoria, including a challenging specialist field manual that I wanted printed on waterproof paper. They had never done that before but were willing to try. Now I understand they offer it as one of their options and for a while there (if not still), they used my book as an example of what the paper looks like in book form and how it performs in the rain.

As this was a book we planned to sell on our company website (rather than try to offer through commercial outlets), I just had our website designer add it to our “Products” page and left it at that. This has meant that we have ordered a box of books at a time, so that I can have them on hand to mail as soon as someone orders one. I take care of the mailing. That means we don’t really take advantage of the “print on demand” feature but having the book on hand saves having to run downtown to pick up each copy as it comes off the printer before it can be mailed.

I’ve also self-published a book I spun off my dissertation, with Trafford Publishing (which used to have headquarters here in Victoria but has since been sold to some US outfit). I paid only for the minimum package and found my own editor and cover designer, as well as someone to design a website. I was happy to have them set up book sales with Amazon and other outfits, as well as get an ISBN, etc. as those things were new to me. Now that I know what’s involved, it seems a huge price to pay for a small amount of effort on their part.

I went the Amazon route for my novel, Eaten.

When you are finished downloading your files to submit a Createspace hard copy book, you are invited to let some auto program generate a Kindle version (that’s where the confusion comes in, I think). But I had done my homework and been advised it is better to create your own Kindle file – or to be more precise, have someone savvy in this process do it for you.

I have actually been pretty happy with the Amazon experience, with the exception of one frustration which I’ll go into below. Since I’d hired someone to format the files to Amazon specs, the downloading went amazingly fast. I found some odd little errors in both files that needed correcting after I’d submitted everything but uploading new corrected files went seamlessly.

I didn’t feel that either CreateSpace or Kindle made misleading promises, but then, I did some Googling around beforehand to get a sense of what was going on. I’m guessing you’re talking about the not-so-subtle pressure for authors to enroll their Kindle ebooks in their “KDP Select” program. The problem with that, which I learned ahead of time, is that you have to agree to sell your book only in Kindle format (no iTunes, NOOK, etc). That didn’t sound like a good idea to me, especially excluding Apple appliances. So I skipped the KDP Select and published all the alternative formats with Smashwords.

Smashwords has been great – straightforward instructions, payment options, pricing structure, etc. They submit your finished ebooks to the retailers of the specific readers (iTunes, Barnes and Noble, etc). That said, Kindle sales – at least for me – have far surpassed any of the other ebook formats.

As an author, I can order however many copies I want at my author price (FYI, just to give you an idea, my author price is $4.66), and yes, I have to pay the shipping. I can have books sent to myself (to sell locally) or to anyone else. I’ve sent a bunch of review copies out that way rather than pay to mail them from Victoria after I’ve already paid to get them here. For example, I made a deal with a book distributor in Newfoundland to take my books on consignment (a bit of a risk but what the heck): I place an order for 80 books to be sent directly to Newfoundland, for which I pay the author cost of the books times 80 plus the shipping. My sale price for the book has to include that shipping cost as well as the initial cost of the book. That relationship with the Newfoundland distributor has worked very well so far – the least expensive shipping option  has proven fast enough for their purposes (usually about 5 days to St. John’s, if you can believe it, although Amazon’s ETA was about two weeks). So far, they’ve re-order three times – that’s 320 books – and we haven’t had any trouble.

CreateSpace doesn’t set up a website for authors, but then I don’t know any other self-publishing outfit that does. Trafford didn’t – or at least, not without a huge extra charge. I figure it’s probably cheaper to hire someone yourself to do that. I did pay for a website design for my Trafford book but opted for a cheap WordPress blog alternative for my novel. Having run my polar bear blog for three years, WordPress was a comfortable format for me. I might decide on a dedicated separate website later but I think what I’ve got is working so far – it’s a place where the book info can be easily found and where I can add relevant content of interest. It’s got a contact form so that potential reviews, journalists, and readers can reach me if they want. There’s no point in me selling books from my own website, as that part of the process is what Amazon does particularly well. Plus, they accumulate reviews which can be very useful.

Here’s the problem I have with both CreateSpace and Kindle: they don’t accept Canadian banks for direct transfer payment of royalties. Kindle now claims they do but their form will not accept the information that Canadian banks require for a US transfer (all Canadian banks go through some third party intermediary, usually a New York bank, before it comes into Canada), so effectively Canadian authors are locked out of direct payment of their royalties. The alternative is to wait until $100 in US funds (or 100 pounds, or 100 Euros, or $100 Canadian) accumulate and then they will send you a cheque. But many banks charge to cash a US cheque, which means you loose a big chunk of that. Worse, my bank now won’t accept a UK or EU cheque at all!

I had no idea going in to the Amazon process that getting paid would be such a problem or that it would rapidly shape up to be quite a serious one – I could see hundreds of dollars in earned royalties sitting in Amazon’s bank for months (even years) with no way to get them to me. Multiply that by maybe hundreds of thousands of foreign authors that publish with Amazon and you can see why they are not keen to rectify this situation.

The new hitch: Kindle announced in May/2016 that it would no longer offer the cheque alternative to direct deposit for non-US authors. This meant that all Canadian authors, myself included, had no simple way to collect our royalties at all. It seems an incredibly stupid way to do business – my bank manager was flabbergasted to learn that a US company would flat out refuse to accept the routing information required to get money transferred from the US to Canada. I called the help line at Amazon and got nowhere – they simply insisted I had to set up a US bank account but would not tell me which bank might do that.

My Googling around came up with a fix that did work eventually – it just took some time to set up. The solution is an international banking organization called Payoneer that sets up what amounts to a virtual US bank account (through which you can accept US and other currency bank transfers). Apparently, this is what many Canadian authors are using and by all reports, it seems to work just fine.

My situation was a bit more complex because I published my book through a company I own, so I had to set up a business account rather than a personal one (which most authors would do, I expect). It was a little scary to trust some online outfit I’d never heard of but there was not really any other choice. However, although it’s taken almost two months to get everything in place (mostly due to security checks taking a long time, which I guess is a good thing), this morning my latest Kindle payment got deposited into my Payoneer account. Now that I know it works, I can set up my CreateSpace royalties to get direct deposited that way as well.

One Response to “Some bare facts about self-publishing”