Three ships, one name, one world 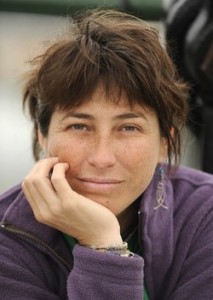 Most British Columbians know that Greenpeace’s flagship vessel is the green-hulled, rainbow-adorned Rainbow Warrior, first launched from Vancouver to protest the American bomb testing near Amchitka, Alaska. Far fewer realize that, as of 2016, there have been three separate vessels with that name.

The first Rainbow Warrior was famously bombed and sunk by French intelligence agents in Auckland, New Zealand, in 1985; a second Rainbow Warrior was retired from service in 2011; a third set sail in October of 2011. Rainbow Warriors: Legendary Stories from Greenpeace Ships (Between the Lines $24.95) by Maite Mompó tells the stories of life aboard these three ships, describing some of the most memorable Greenpeace adventures at sea. As a Greenpeace activist for more than ten years, Maite Mompó of Spain has worked as a crew member on the Rainbow Warrior, mostly on the second incarnation of the ship.

Kumi Naidoo, Greenpeace International’s Executive Director, calls the Rainbow Warrior “an icon of non-violent direct action and a beacon for hope for millions of people around the world.” Mompó proves that assertion by outlining the ship’s role in helping to end nuclear testing in the Pacific and blocking destructive fishing operations. As well, she described the imprisonment of the so-called “Arctic 30” by the Russians. In the course of recording the history of the Rainbow Warriors, Mompó sheds light on the history of Greenpeace overall. To complement tales of nautical daring, she provides colour photos from the Greenpeace archives, maps, and nautical charts.

Other essential B.C.-based book about Greenpeace include:

Hunter, Robert. To Save a Whale: The Voyages of Greenpeace. With Rex Weyler.

Weyler, Rex. Greenpeace: How a Group of Ecologists, Journalists and Visionaries Changed the World (Raincoast, 2004)