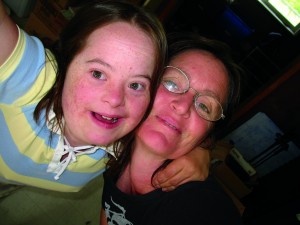 In 2015, Valerie Hennell published and edited her daughter-in-law Kari Burk’s family memoir about raising her daughter Mielle who was born with Down syndrome. After their book Snapshot of a Soul Place in the Land of Special Needs (Grand Poobah / Friesens $30) won a 2016 Family Choice Award to recognize the best in children’s and parenting “family friendly” products, it has now won a 2016 National Parenting Product (NAPPA) Award.

At the request of BC BookLook, Valerie Hennell has provided the following summary as to why Snapshot of a Soul Place was independently published:

“We undertook Snapshot of a Soul Place independently because it was the only way it could happen. Sometimes an idea simply has a life of its own. The vast range and quantity of Kari’s art and her out-of- the-box attitude and writings, plus her lack of time and financial resources as a single mother of a daughter with Down syndrome, dictated that we just plunge in and let the book show us what it wanted to be.

“We wanted to do the project together and publishers usually have their own stable of editors and illustrators. We wanted to present the story in a unique high quality context that showcases her art. We worked long distance, she gardened by day while I jostled hundreds of pages of writings, paintings, drawings and photos. We spoke by phone most every night for a couple of years. “My husband Rick was the wall I threw the mud at when uncertain. I’d say, what about this? And he’d say, I’ve heard that before, leave it out, so helped steer us clear of clichés. He fed me tea and sustenance while I covered every surface in our house with scraps of paper.

“The process was almost five years, the last two years pretty much fulltime for me as first, second and third drafts and paste-ups emerged.  I’m an analogue baby so I physically cut and pasted together mock-ups and photocopied them at Staples before handing the design over to Ronan.  My 28 year old grandson Max, Mielle’s brother, helped with image scanning.

“We did an Indiegogo campaign to raise $2500 to pay the graphic designer, Ronan Lannuzel, who lives here on Protection Island. He came on board at our first chance meeting when I discovered he had a young friend with Down syndrome and was sympathetic to our theme. Our sensibilities meshed and working together was a joy, even squeezed in between his other commitments. Sometimes he’d work all day for the Food Bank then kayak home, design for other clients all evening and then meet me for an hour first thing the next morning. I’d have long lists of revisions and we’d chug through them.

“The book’s format was landscape until I discovered you can’t make an e-book that’s landscape even though screens are landscape. Go figure.  The week we were grappling with this issue several square books of Snapshot’s exact dimension crossed my path: one about bush pilots (my dad was a bush pilot), one Rick brought home on imaginary instruments,  and one Kari reminded me I’d given her two decades ago — a square Paul Klee book in which I’d written, ‘Kari, someday there will be a book like this about you’– of which I have no memory.

“We chose Friesens because they are simply the best, dedicated to excellence and so patient with my ignorance. The laminated cover was inspired by the Emily Carr book “Sisters”. Before I was born, Alice Carr was my father’s family nanny in Victoria – my grandfather designed the little stone bridge in Beacon Hill Park that Alice built as a tribute to Emily in 1954.

“We liked the friendly way “Sisters” felt in the hand, we wanted hard cover so the book would stay open in the laps of the alter-abled. And we wanted it to be beautiful because where does one see positive images of special needs in a coffee table context?  I kept reminding her, making a book is 1,763 tiny decisions and that’s before you go to print. “I’ve helped design many award winning CD packages. ‘The Great Gazzoon’ was a finalist for an Audio Publisher’s Association APA package design award in New York, so doing an actual book seems like a natural progression.

“We did consider Caitlin Press as a publisher and she was very welcoming and encouraging but by the time we found them we were so far down the self-publish road that we didn’t want to pause to go through their process. We felt like we had to ride the momentum we’d created or the whole thing would just collapse. It would be terrific  if a publisher picked it up now, we’ve done some of the PR legwork, we’d love to have support and distribution.

“The book has a target audience, and if we get into libraries, schools and community organizations we’ll likely recoup our financial investment. My hope is it will open an income stream from art and illustration for Kari going into elderhood. She’s a 53-year-old landscape gardener and can’t push the wheelbarrow forever.”

Kari Burk is a landscape gardener and artist who lives with her 25-year-old daughter, Mielle, in Castlegar, after parting company with Mielle’s father on the coast and moving to the Kootenays when Mielle was 16.

Born with Down syndrome in 1990, Mielle had open heart surgery at eight months old to repair her atrioventricular canal. Her second heart surgery at age twelve was more difficult. In Burk’s family-published memoir, Snapshot of a Soul Place: In the land of special needs (Grand PooBah Music Publishing / Friesens $30) we learn it is common for people with Down syndrome to have heart problems. Editor and co-writer for this remarkably intimate book is Burk’s mother-in-law on Protection Island, Valerie Hennell, who is married to folksinger Rick Scott, aka Grandpa Jumbulz. Because of his special needs granddaughter, Scott has become a Goodwill Ambassador for the Down Sydrome Research Foundation. Scott’s song for and about Mielle, ‘Angels Do’, now serves as an unofficial anthem for people with special needs. A video of the song starring Mielle ran on Treehouse TV for ten years (now viewable via YouTube).

“I realized,” writes Scott, “that for better or worse, our family had been given an angel. But this is not the Hallmark card kind of angel. Instead of wings, this angel would have scars. She couldn’t fly but would walk on the earth and people would not want to look at you, or worse, would stare. Often you would be shunned.

“This angel would teach me new ways to laugh and cry and show me a world I never knew existed. At the end of the day you’d be exhausted but perhaps your heart would be a little bigger and you’d have discovered a new understanding of the word ‘compassion.’”

Published to coincide with Down Syndrome Awareness Week in the first week of November, Snapshot of a Soul Place amounts to a life story told from the different angles of people who love and respect Mielle, replete with 40 original paintings and 60 photos. It’s the first book from Hennell’s company that also handles Rick Scott’s musical catalogue of 18 recordings and his musical audio novel, The Great Gazzoon.

In her narrative that is as informative as it is touching. Burk describes how babies with Down syndrome often have difficulty breastfeeding due to hypotonia (low muscle tone). Mielle’s heart condition also made her tire easily so she had difficulty latching on in order to get enough milk. Visits to the Vancouver Breastfeeding Clinic proved beneficial. Burk also credits the Vancouver Infant Development Program, sign language classes and the supportive climate at Lord Tennyson Elementary. “Perhaps the greatest obstacle faced by a person with special needs,” Burk writes, “is being misunderstood and in turn, isolated, from life’s processes and events.”

Kari Burk was born in Calgary in 1962 and moved to BC in 1968. As a landscape gardener, she operates Muddy Tutu, Organized Grime and Garden Art in Castlegar. A graduate of Emily Carr School of Art and Design, she previously self-published 14 chapbooks of poetry and exhibited and performed throughout BC.

Snapshot of a Soul Place is more evidence that many of the best books in B.C. are being self-published by sophisticated folks who deeply care about their subject matter, and take years to bring their passion projects to fruition.

Funding agencies, merchandizers and professional organizations like to pretend that such useful and heartfelt books as Snapshot don’t really exist or that they are deservedly marooned below the media radar because they are nearly always second-rate—as if desire for profit is somehow a superior measuring stick for quality or public value. Although this logic is daft, such prejudices—mostly in the name of commerce—persist.