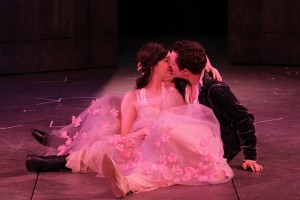 To open his 27th season of Bard on the Beach, as the costumed cast of Romeo & Juliet emerged behind him with a stunning panorama of the North Shore mountains in the distance, Bard artistic director Christopher Gaze, in a business suit on stage, reprised the opening R&J monologue that he had delivered that same morning for his live infomercial interview with CBC’s Rick Cluff.

It went downhill from there.

Burdened with microphones, with only a few exceptions, most of the cast were unable to believably converse with one another. They weren’t delivering their lines to the audience either. Rather they were giving voice to Shakespeare into the stratosphere of a tent. It took only seconds to start wondering what percentage of the cast had received training specifically for Shakespeare? With all the dough generated by wine festivals, free labour (volunteers) and the public purse, coupled with preferential treatment from the City of Vancouver (new BMO digs), can’t world class Vancouver, the most expensive city in Canada, afford to have a Shakespeare festival that provides actors with adequate access to expertise on the very particular challenges of Shakespearean dialogue?

In this accent-free production there was little reverence for cadence; instead, there was lots of shouting, lots of prancing and merry outbreaks of clattering swordplay. Amid the oral hodge-podge, we saw actors constantly moving a lot of furniture and making loud entrances and exits from every which-way in a production that often appeared to be aiming at being entertaining rather than memorable.

Director Kim Collier is a huge and proven talent; here the best elements of her Bard production are visual. Enhanced by lighting by Gerald King, there were some stunning tableaux. And much was accomplished with only two blocks of a large castle-like wall for a backdrop from Pam Johnson.

But if we don’t care about the romance, it’s hard to care about the play. We’re told in the script that Romeo is a bit of a catch, a hunk, but Andrew Chown lacks animal magnetism. It doesn’t help that the costume design for opening scenes burdens the male players with bizarre shredded outfits that expose lots of very white skin. In several cases it looks like they’re wearing torn female cast-offs from a hot yoga session. Hey, these guys have not been lifting weights. From the back row, Andrew Chown has an unfortunate resemblance to Rick Mercer.

As Juliet, Hailey Gillis tries her earnest best to be a love-struck fourteen-year-old, but she’s better at being flustered than fetching. We do not believe there’s an earthly attraction between the doomed pair. It’s mere play acting rather than emotional acting. But, hey, we have been told and taught so often that Romeo & Juliet is romantic, so isn’t that good enough?

With fewer crowd scenes, the second act rises to a more dignified level. Romeo & Juliet is really about the tragedy of feuding families, of social estrangement, a morality tale about the dangers of being governed by hatred. If there’s an outstanding performance, it’s Jennifer Lines as the nurse. (“Now comes the wanton blood up in your cheeks!”) Her enthusiastic presence [seen at left, with Hailey Gillis] has the verve and the strength of purpose of someone who has fully inhabited her character.

Meanwhile, Juliet is called upon to carry red balloons and another character wears headphones. It’s a presentation that doesn’t resist an ending in which the dead lovers rise from their deathbed, as if resurrected, to stand together like two newlywed figurines atop a wedding cake.