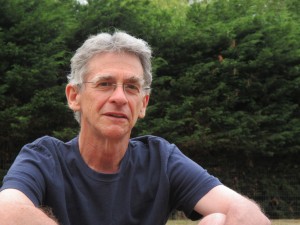 Richard Therrien does not tweet. He considers his itinerant years—making candy, washing dishes, building stone walls and gardens, clearing bush, delivering useless goods, and selling advertising—to be vital to his journeyman years as a writer. He has hitch-hiked across North America and Europe, hopped freight across the prairies and Rockies, and worked on a freighter to Japan. He studied at The Cuernavaca Center for Intercultural Dialogue on Development in Cuernavaca, Mexico (founded by Ivan Illich) and written essays in various Sufi journals. Along the way he has also worked in television, conflict resolution, for non-profits, for peace and development and taught creative writing. Also a ghost-writer, he has edited Royal Commission Reports, government studies, memoirs and novels. He has published poetry and prose in various periodicals, including Grain, The New Quarterly, Prairie Fire, Filling Station, Absinthe, and CV2.

Richard Therrien was born in St. Boniface Manitoba, grew up in Edmonton, lived in Calgary, Jasper, Vancouver, Montreal, Guelph, Inuvik, and Qualicum Beach. He then moved to North Vancouver.  [Photo by Isaac Therrien]