Mapping the way back home 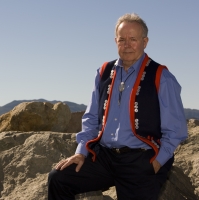 From 1975 to 2009, Neil Sterritt and his family lived at Temlaham Ranch, the site of a Gitxsan ancestral village on the Skeena River (a.k.a. Temlaxam or Dimlahamid), during which time he was hired as land claims director for the Gitksan-Carrier Tribal Council.

A member of the House of Gitluudaahlxw, he was president of the Gitxsan-Wet’suwet’en Tribal Council from 1981 to 1987, key years in the lead up to the precedent-setting aboriginal rights case known as Delgamuukw v. BC.

As one of the principal architects of the 1987 court case, Sterritt was on the stand for 34 days during the Delgamuukw trial. He has since written extensively on aboriginal rights and governance and served as a consultant to many aboriginal organizations around the world, having co-authored Tribal Boundaries in the Nass Watershed (UBC Press 1999).

In 2008 Sterritt received an honorary doctorate from the University of Toronto in recognition of his “lifetime contributions to the understanding and expression of aboriginal citizenship in Canada”. He also served as Director of Self-government, Assembly of First Nations in Ottawa from 1988 to 1991.