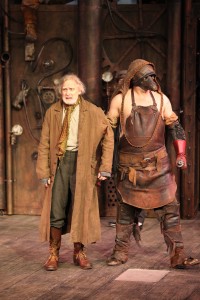 The 2015 Jessies have yet to be awarded and already we have a frontrunner for Best Direction for 2016. Scott Bellis’ delightfully daft The Comedy of Errors is an inventive, smartly-paced triumph of inspired frivolity boasting a cohesive and playful cast that has clearly trusted his vision.

This is a reinvigorated and expanded “steampunk” version of the play dating from Bellis’ participation in a Studio 58 production at the outset of his career. If the adjective steampunk is a tad offputting, think Mad Max meets Monty Python augmented by eerie, electronic music, some dream-like, choreographic sequences with the ensemble, and a Venus Fly Trap that eats a finger.

Characters sport old school goggles for no reason, there is goofy violence and all the actors are wearing microphones, yet somehow we are transfixed by Shakespeare’s hackneyed storyline about two identical twin brothers, long separated, who have identical twin brothers for servants. To make the action dizzying and ditzy, these four main, male characters have two names between them, instead of four. Pam Johnson’s alluring set design of cogs and wheels; Mara Gottier’s stellar costume design; and the atmospheric soundscapes from Malcolm Dow are marvellously in synch with Bellis’ madcap but poised presentation. There’s an aura of comic malevolence—like a dark Spamalot during the Industrial Revolution—with just enough reverence for Shakespeare to allow everyone to relax and enjoy the performances.

The crucial roles of the male servants named Dromio are play by women, Dawn Petten and Luisa Jojic, with a remarkably similar degree of zest and physical symbiosis. It is a credit to both of them that we are never waiting for the better Dromio to return to the stage.

The two brothers named Antipholus (of Syracuse and Ephesus), Ben Elliott and Jay Hindle, are effectively similar in size and delivery, with Elliott briefly stealing the spotlight during a frenetic dance number that unexpectedly features some remarkably deft moonwalking.

Nell the Cook and Maud the Chambermaid are played by Andrew McNee and Daniel Doheny with equal enthusiasm. If Nell’s inarticulate howlings sound exactly like Chewbacca in Star Wars (and another one of the characters sounds rather like Kermit the Frog), we love him/her regardless. The scene is which Nell feeds the Venus Fly Trip one of her own fingers is one of the weirdest and most memorable pranks we’ve seen in years.

This is one of those shows wherein the audience relaxes because they can see how much fun the actors must be having. It sounds over the top, but the action never lags and there is sufficient attention paid to the text. Technologically, this show works. We hear each word clearly and Bellis adds physical activity with nearly every speech. We are forced to pay attention in order to keep up.

Andrew Cownden as the goldsmith manages to provide some emotional resonance in a relatively minor role and, as the stern Abbess of Ephesus, dramatic actor Anna Galvin has one of the more memorable visual moments when her former identity is revealed. Shedding her cloistered finery, she is held aloft like an angel and sails down from her ethereal position to become her earthly self.

The downside of using microphones is that it tends to limit intimacy between the actors. Bard has succeeded in offering crowd pleasing fare, but there is still a bit of work left to do to deliver emotions when all is well that ends well. (We don’t get to feel any relief or joy when the patriarch Egeon is spared the executioner’s fire pit. And the reunion of the two pairs of twins is so swift that there is no emotional payoff for the audience.)

Egeon is smartly played by Bellis, who delivers an adroit opening monologue. Amid the chronic confusion, Petten delivers one of the best lines—possibly ad-libbed during rehearsals—“Call before you dig.”

It’s risky, it’s silly, it’s original and it’s clever, amounting to a delightful feast of comedy on a summer evening.

[Top photo: Scott Bellis as Egeon and David McNee as Executioner. Photo for Bard on the Beach by David Blue.]