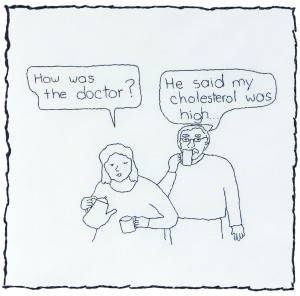 Sima Elizabeth Shefrin’s husband was diagnosed with prostate cancer in 2011.

“Every time something made us laugh,” she says, “one of us would say, ‘That goes in the comic.’

“As it turns out, a lot of the jokes in the comic are about sex. This is because Bob’s surgery included cutting the erectile nerves. Little of the cancer literature talks about this from the partner’s point of view, or about its effect on the relationship. Yet that loss became a part of our daily lives.”

Having been a fabric artist for forty-four years, Shefrin stitched the sixty embroidered line drawings that appear in the book, making her book one of the most unusual manuscripts in B.C. literary history. Sima Elizabeth Shefrin played as a toddler in the galleries of Italy, and has been creating art ever since. Born in Ottawa in 1949, partly raised in Rome, she came to B.C. in 1971. She has primarily worked as a fabric artist and a book illustrator, describing herself as someone who is stitching for social change. Her international community art project, The Middle East Peace Quilt, toured North America for ten years.

Shortlisted for the Christie Harris Prize for Abby’s Birds (Tradewind), Sima Elizabeth Shefrin has also provided the charming illustrations for former primary school principal Vi Hughes’ Once Upon a Bathtime (Tradewind $17.95), for ages three to six. 978-1-896580-54-8 2010

With 10 colour plates by Sima Elizabeth Shefrin, Latkes (Nick Books 2007) is an illustrated work of adult fiction by folk music icon Bob Bossin, co-founder of Stringband. The text weaves together a revisionist telling of a 16th century Jewish folk tale and a 20th century conflict between an “Old country” father and his Canadian son.