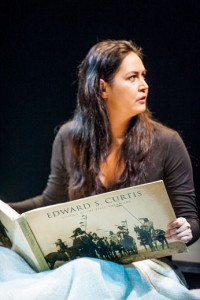 Directed by Marisa Emma Smith of Alley Theatre, Quelemia Sparrow is a First Nations actor and writer from the Musqueam Nation who created an autobiographical, one-woman performance play, Ow’et / Lost Lagoon, described as a visceral, spiritual canoe journey of healing. It explores intergenerational trauma through the life of a mixed race aboriginal woman who has had an international modeling career but has been equally influenced by fishing trips with her father. O’wet (oh-wee) is a verb colloquially used to denote propelling a canoe. The word is also connected to a shaman’s canoe ride to the land of the dead to retrieve a lost soul. According to Sparrow: “Some say your soul will leave your body during a terrible fright. You must journey to retrieve it.”

Ow’et / Lost Lagoon will be presented at the Firehall Arts Centre in June and at the Playwrights Theatre Centre where Sparrow is an Associate Playwright. O’wet / Lost Lagoon was originally commissioned by Full Circle: First Nations Performance as part of a larger work, and benefited from the work of the Full Circle Aboriginal Ensemble, including director Margo Kane, dramaturg Michael Springate, and Associate Dramaturg and Researcher Kwasuun Sarah Vedan. The play will be performed at the Firehall Arts Centre at 280 East Cordova Street from June 21 to 25 (Media Opening Wednesday, June 22nd @ 8pm).

A graduate of Studio 58, Sparrow has written screenplays and appeared in productions that include Our Town (Osimous Theatre), The Edward Curtis Project (GCTC/NAC), The Penelopiad (Arts Club Theatre), Where the Blood Mixes (Playhouse/WCT) and The Fall (Electric Company).