The perils of Tahrir Square

Karim Alrawi's Books of Sands is about living honestly, and with grace, during times of chaos. 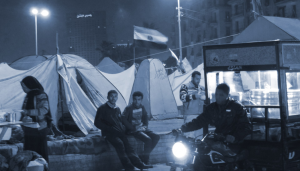 Set in Egypt, it has received the inaugural HarperCollins/UBC prize for Best New Fiction.

In a room overlooking the square in Cairo, with two million pro-democracy demonstrators below, Karim Alrawi had a bird’s-eye-view as government thugs threw Molotov cocktails and rocks at protestors who sheltered behind barricades of iron sheeting.

Protestors had erected a tent city within Tahrir Square until the dictator Hosni Mubarak finally resigned.

During three weeks of protests, performers maintained a carnival-like atmosphere to maintain morale. Teams of young people cleaned the square daily. As protestors were killed, posters were made of the martyrs and hung from buildings and lampposts. Alrawi was in Cairo putting the finishing touches on two books.

The Mouse Who Saved Egypt (Tradewind $16.95), illustrated by Bee Willey, is a teaching tale of kindness for children, showing how even a small creature can be heroic as a mouse saves ancient Egypt in an unexpected way.

Book of Sands: A Novel of the Arab Uprising (Harper Avenue 2015) is a debut novel set amid the upheaval of the Arab Spring in 2011.

Here James Paley reviews Alrawi’s story about  a mathematician who becomes a puppeteer during the social upheaval of the short-lived Arab Spring.

Folk tales and children’s stories and holy writ all bleed into one frame in Karim Alrawi’s Book of Sands (HarperAvenue $29.99), a debut novel about a modern city in crisis. Subtitled ‘A Novel of the Arab Uprising,” it revisits the protests and the demonstrations that erupted in Egypt during the so-called Arab Spring.

Social upheaval is the backdrop, but Alrawi concentrates on one man’s struggle to keep his family together. Tarek is a puppeteer. So why is he driving through the desert with his nine-year-old daughter? Why is he always afraid? And why does his daughter have two mothers?

Alrawi, a Vancouverite, skilfully uses folk tales and his own puppeteer stories to connect modern Egyptian life with the distant past, to make life coherent during a time of strife. Some of the contemporary characters have ancient beliefs. Alrawi is reluctant to pass judgment. Instead he provides sombre commentary on the hearts and minds of a nation. Some men grip god too tight, such as his brother-in-law, Omar; others favour science and rationalism. Tarek was originally a mathematician, but after having been wrongfully imprisoned for attending a protest, he switches to being a puppeteer, chiefly in order to cement the bonds of love with his daughter, Neda.

We don’t know for certain that the story unfolds in Cairo—Alrawi was born in Alexandria—but his descriptions of the lingering acrid smell of tear gas can only mean he has been inspired by events at Tahrir Square. Tarek only visits the central protest location once, for less than one hour, searching for a friend’s son, but it turns out to be undoing.

We can sense how the swell of civil unrest has unhinged the characters. Correspondingly there are several key moments in the story which intentionally unsettle the reader.

Birds are all over the city. Halfway through the novel, Neda, wakes from a nightmare to see swarms of birds flying out of the mouths of mourners. We never learn whether these fantastic events were imagined or experienced.

Drinking arak, and smoking bango, Corporal Aboud hallucinates while looking at a fire. The flames and smoke coalesce into hyenas. Aboud and his pack of hyenas proceed into town. They proceed obliterate an entire household.

Tarek’s role as a storyteller echoes this technique. He tells his daughter fables which, unbeknownst to her, are based on real events, on the real world. Like the bird swarms, or Aboud’s massacre, we’re never know the extent to which Tarek has embellished his tales.

Gradually we learn that the birth of his daughter and meeting his wife—events that occurred in that order—would not have happened without his youthful dissonance and rebellion.  But Tarek’s struggle never gets grandiose or analogous to the fighters in the city square. The novel’s focus is always on the immediate entanglements of family and obligation.

While the Arab Spring protests are frequently mentioned, once Tarek flees the city—after his puppet show has been mentioned on the TV news—that struggle for democracy fades to white noise.

Tarek needs to parse the world through logical means. Using the math of his former life, Tarek writes love letters to his wife and daughter. They are a touch of heartfelt whimsy in an otherwise bleak landscape. Meanwhile Omar serves as the foil to Tarek’s narrative as an Old World devotee who finds every answer in scripture.

Book of Sands succeeds in capturing the beauty and violence of a whole movement in one family’s story. Every setting in Book of Sands carries the fresh imprint of violence. The seeds of the uprising are set in bloody soil. In spite of the obvious hardships crushing the characters, everyone pushes ahead, resolute. It’s this balance that leaves the reader in a state of comfortable tension. You fear for these people’s safety, yet you believe in their ability to succeed. 978-1-44343-445-4

James Paley is a Douglas College student in Professional Communication.