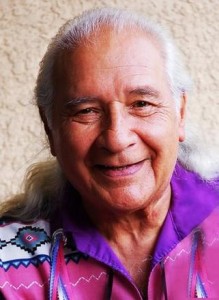 Larry Loyie (aka Oskiniko) was born in Slave Lake, Alberta, where he spent his early years living a traditional Cree life. He died on April 18, 2016 at age 82.

At the age of ten he was placed in St. Bernard’s Mission residential school in Grouard, Alberta. “We had no more family life,” he recalled, “and we weren’t allowed to speak our language. Mostly what I learned there was how to pray and how to work and how to sing Latin at Mass. We got to go home once every school year, though many children stayed the whole year. It was basically worse than jail. Everything that was natural to a small child was a sin and we got punished for it. I didn’t know about sin and heaven and hell until I got there, and then I was always getting beatings from the nuns. I ran away twice and both times I was caught and severely beaten. After that I started reading everything I could get hold of. There were classics like Huckleberry Finn but there was exactly nothing about Native people. We were punished for the fact that hundreds of years earlier Jesuits had been killed by Native people. I lost all feeling about my Native heritage.”

As he describes in his autobiography of his boyhood, When the Spirits Dance, World War greatly upset Loyie’s family life. Having already served in World War One, his father Victor Loyie, at age 43, was called up to serve again in the Canadian Armed forces as an illiterate man with nine children. In 1942, food was rationed and families drank Klim (milk spelled backwards), a drink made from powder. When the Spirits Dance describes how Larry Loyie helped his family endure.

At 14, Loyie left school to work on farms and in logging camps. At 18, he joined the Canadian Forces, living in Europe before returning to work in northern British Columbia and Alberta. “Through it all,” he says, “the longing for the traditional First Nations way of life I experienced as a child always stayed with me.” Many years later, in Vancouver, he went to the Carnegie Centre at Main & Hastings to upgrade his education and writing skills, and to learn typing. In 1991, he traveled around British Columbia to interview Native teachers for two radio documentaries. The following year he co-edited an anthology for novice writers called The Wind Cannot Read, having traveled across Canada to collect material for a 1,000-page manuscript. One of his writing instructors, Constance Brissenden, quickly realized she was learning as much from him as he was learning from her. Their partnership and mutual concerns led to the creation of new writers group called Living Traditions in which Loyie blossomed as an educator and as an author of several plays, short stories and a children’s story dealing with residential schools, native traditions and literacy. Loyie’s first play called Ora Pro Nobis (Pray for Us) was based on his residential school years. It was staged in Vancouver and five federal B.C. prisons (1994), at Weesageechak Festival in Toronto (1995) and in Alberta (1998). Excerpts from the play are included in Away from Home: American Indian Boarding School Experiences, 1979-2000 (Heard Museum, 2000). Loyie wrote two more plays, Fifty Years Credit, based on the media’s view of First Nations people, performed at Carnegie Community Centre (1998); and No Way to Say Goodbye, a commission for the Aboriginal AIDS Conference in northern Alberta (1999). All of his plays have benefitted from his association with Brissenden.

For Loyie’s autobiographical children’s book, As Long as the Rivers Flow, Loyie and Brissenden toured Canada to present more than 90 readings. Due to Loyie’s voice ailment, Brissenden reads the text; Loyie responds to questions. This poignant memoir recalls Loyie’s last summer of freedom before he was forced to attend residential school. Cree artist George Littlechild suggested Loyie write the story for children. “I told George about the truck that picked us up and took us away,” Loyie says. “The sides were so high, we could only see the sky.” Illustrated by First Nations artist Heather Holmlund, As Long as the Rivers Flow reflects Loyie’s perspective at age nine as he cares for an abandoned owl, watches his grandmother make moccasins, helps the family prepare for a hunting trip and receives a new name, Oskiniko—meaning Young Man—a name he still uses. Children are fascinated by the story of Larry’s tiny grandmother, Bella Twin, who reputedly shot the biggest grizzly bear in North America. First Nations communities are using the book in classrooms, at conferences, and for healing purposes. Some listeners are moved to tears. As Long as the Rivers Flow was selected as the 2006 Honour Book of the First Nation Communities Read program.

In mid-September of 2003, Loyie was singled out for an honour dance at the Niagara Native Friendship Centre in St. Catherine’s where more than 200 people lined up to shake hands with the writers, then gathered behind them as they danced slowly around the arbour while drummers sang a special song. “Being recognized by my own people this way,” says Loyie, “was the greatest honour I could have.” Loyie is also the recipient of a 2001 Canada Post Literacy Award for Individual Achievement (British Columbia) and the 2003 Norma Fleck Award for As Long as the Rivers Flow. Larry Loyie is also featured in Honouring Time: A 15-month Aboriginal Day-timer (Ningwake Learning Press & TransCanada, 2001) and Learning about Participatory Approaches in Adult Literacy Education (Edmonton: Voices Rising, Learning at the Centre Press). He contributed the essay on First Nations people for The Greater Vancouver Book (Vancouver: Linkman Press), edited by Chuck Davis.

In 2007, Loyie moved to High Prairie, Alberta, with Constance Brissenden to build a log house.

The Healing, a Memoir for Four Voices by Larry Loyie (Order from Living Traditions Writers Group at livingtradition@telus.net).

(Toronto, September 2, 2003) – The Canadian Children’s Book Centre (CCBC) and the Fleck Family Foundation are delighted to announce the winner of the 5th annual Norma Fleck Award for Canadian Children’s Non-Fiction: As Long as the Rivers Flow by Larry Loyie with Constance Brissenden, illustrated by Heather D. Holmlund and published by Groundwood Books. The $10,000 Norma Fleck Award is the largest of its kind in Canadian children’s books. Dr. Jim Fleck of the Fleck Family Foundation, and son of Norma Fleck, announced the winner on September 2nd, 2003.

The Norma Fleck Award jury’s calls As Long as the Rivers Flow “… a joyous, heart-breaking memoir that recalls a Cree boy’s last, idyllic summer with his family before he was taken away to attend a residential school… beautiful illustrations… kindles a sense of injustice and loss….”

The other finalists for the 2003 Norma Fleck Award for Canadian Children’s Non-Fiction were: Beyond the Dance: A Ballerina’s Life by Chan Hon Goh with Cary Fagan (Tundra Books), Under the Ice by Kathy Conlan (Kids Can Press), Wilfrid Laurier: A Pledge for Canada by Roderick Stewart (XYZ Publishing), Wizards: An Amazing Journey through the Last Great Age of Magic by Candace Savage (Greystone Books)

The Gathering Tree, a children’s book to introduce the subject of HIV/AIDS, will be available in September 2005. The book will be published by Theytus Books of British Columbia with Chee Mamuk, Aboriginal HIV/STI education program of the BC Centre for Disease Control.

Written by award-winning First Nations author Larry Loyie with co-author Constance Brissenden, the book is a gentle, positive story of a family facing the illness of their favorite cousin Robert. As the children, Tyler and sister Shay-Lyn, learn more about HIV, they discover that illness can bring understanding and self-awareness. Encouraged by the elders, Robert speaks to the community at the annual traditional gathering, encouraging them to learn more about HIV.

The book will also include study material for teachers, parents, health educators, and students. The age range for the material is 9 years old and up.

For further information on the authors and illustrator, see www.firstnationswriter.com.

Funding for this book was provided by the Provincial Health Services Authority, Aboriginal Initiatives.

Tyler dreams of running marathons like his older cousin Robert. So when Robert arrives on the bus for the annual First Nations gathering, wearing a cowboy hat and a big smile, eager for his daily run, it’s hard for Tyler to believe his favourite cousin is ill. At 21, Robert has HIV. By speaking out he hopes he can encourage an awareness of AIDS among the First Nations community. That’s the set-up for The Gathering Tree (Theytus $19.95) co-authored by Larry Loyie and Constance Brissenden of Vancouver. During an outing to the zoo, Robert tells Tyler and his little sister, “I’m just like this tiger…locked up in a cage. We both want to be free but we’re not.” Robert further explains why he can never be away from the city and his doctors for long periods. At the rural gathering, under the old tree that had welcomed his people for generations, Robert adds, “I thought I could run through life, winning trophies, partying, and that nothing bad would ever catch up with me. “[But to heal] I had to tell the truth and be open to others.” Later, when Tyler joins in an honor dance to support Robert, he suddenly understands that by just being part of his family, he’s helping Robert stay strong. With illustrations by award-winning artist Heather D. Holmlund, The Gathering Tree was initiated by Chee Mamuk, an Aboriginal HIV/STI educational program. Co-author Larry Loyie spent his early years living a traditional Cree life before being placed in residential school. He received the 2001 Canada Post Literacy Award for Individual Achievement and is the author of Ora Pro Nobis (Pray For Us), a play about residential school, as well as the children’s book As Long as the Rivers Flow (Groundwood). In 1993, Loyie (Cree name: skiniko/Young Man) and Constance Brissenden formed Living Traditions Writers Group to foster writing within First Nations communities. 1-894778-28-6

Award-winning children’s book As Long as the Rivers Flow by Larry Loyie named First Nation Communities Read title of the year. As Long as the Rivers Flow by Cree author Larry Loyie with Constance Brissenden with illustrations by Heather D. Holmlund is the jury’s selection for the 2006 First Nation Communities Read title. The book is published by House of Anansi Press/Groundwood Books, ISBN 0-88899-696-9, $12.95. It is the poignant story of Loyie’s last summer spent with his family in a traditional First Nations setting before being taken to residential school.