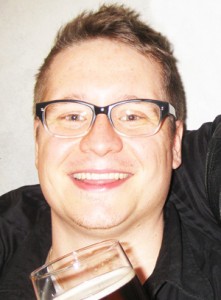 Growing up, Vancouver-born Charles Demers was a politically sophisticated fat kid with a void in sports and cars.

Even though he’s now widely known as a humorist due to CBC Radio stints on The Debaters and stand-up comedy performances in clubs and at festivals, Demers also should be taken seriously as a writer.

Demers’ little-noticed first novel The Prescription Errors (Insomniac Press 2009) was soon followed by a “no-holds-barred look at Lotusland” entitled Vancouver Special (Arsenal, 2009), a critique of neighbourhoods, people and culture. With photography by Emmanuele Buenviaje, Demers’ short essays were born of a friction between estrangement and engagement. His loyalty to Vancouver is both ambivalent and inescapable.

As his friend Kevin Chong wrote in an endorsement: “It’s only fitting that a city with so many unlikely facets–its conspicuous wealth and conspicuously ignored poverty, its inscrutable WASPiness and inscrutable Asian-ness, its left-wing face and right-wing heart–should be both celebrated and excoriated by a writer with such multifarious abilities.”

In 2010, Demers co-hosted at The CityNews List for television; then he made his debut as a playwright with his “East End Panto” version of Jack & the Beanstalk, staged in 2013 and 2014 as family entertainment—all of which has led to a teaching gig at UBC Creative Writing.

Having hosted the BC Book Prizes on several occasions—move over, Bill Richardson—Charles Demers re-entered the literary world this fall with The Horrors (D&M 2015), an A-to-Z compendium of all things awful.

Demers gives new meaning to a 26-er by starting with “A” for “Adolescence”, recalling his sexless teenage years in a Trotskyist sect.

“B” for “Bombing” recalls the sickening sensation of knowing your comedy act stinks.

Here is Charles Demers’ foreword to his new humour collection, The Horrors.

That there exists a sometimes infinitesimally short circuit connecting pain to humour is one of the elemental facts of my life, a lesson laid down in the first few minutes of my existence: while the doctor was stitching my mother’s torn perineum in the maternity ward, Mom turned to the medic and deadpanned: “Might as well stitch it all the way up, doc—nobody’s getting back in there.”

My mother’s side of the family, the Birnies, have always been good at rattling off one-liners to let you know when they’re hurting, even if the jokes come out by accident. When my auntie Laurie was asked, just a few months into her marriage and already frustrated with her husband’s overwhelming focus on hockey, “How’s married life?” she replied, without intending any wordplay: “It’s fine, in between periods.” (I was heartbroken when a terrible version of this same joke appeared on the execrable David Spade sitcom Rules of Engagement; it was like finding out that Guy Fieri had gotten his hands on an old, beloved family recipe, then battered the results in Cool Ranch Doritos.)

The Birnie family has always moved with ease between tragedy and comedy. My uncle Phil could easily have been a professional comic, and the same was often said about my hilarious mom; people were, I’ve been told, constantly telling her that she should be on The Carol Burnett Show—a compliment she couldn’t fully process as one because, inexplicably, she hated The Carol Burnett Show. Nevertheless, she was funny enough, plus she was redheaded. A lifetime of family get-togethers with cousins and aunts and uncles has run together in my memory as an unending string of jokes, funny anecdotes and recounted pranks, like the time when they were children that my Mom told Laurie, “Whatever you’re holding comes with you when you die,” before grasping hold of her, sputtering, and rolling her eyes back in her head.

The thing is, when family members weren’t pretending to die, for gags, they were doing it for real, kicking off the litany of traumas that punctuated the punch lines. Ronnie, Mom’s older brother, is struck by a vehicle and killed at age four; a few years later, her dad, my grandpa, dies at thirty-three from a heart condition, not only plunging the family into fatherlessness but also causing a precipitous drop in socio-economic standing from a family headed by a wealthy, hotshot young lawyer to one led by a widowed mother; at age twenty, the baby of the family, my uncle Chris, is run over by a car while riding his bicycle; three years after that, my mother is diagnosed with leukemia, and she dies a few years later, in the house that my parents, my brother and I share with my granny and auntie Heather, while we are all at home. I am ten years old.

So those are the pitch-black opening credits that roll before the sitcom of my maternal family’s life. I see them ending with the Grim Reaper in the role of wacky neighbour, giving the camera a “Whaddya gonna do?” shrug while a bucket of water or something falls on his head, or he notices one of those pesky Birnie kids has replaced his scythe with a goalie stick. I think those traumas produced the rapid alternation between grief and laughter that marks my family, and defines them for me. It’s probably the way in which I feel most deeply and irrevocably a part of the family, too. What can humour do?

Well, who among us can forget the great Smarm versus Snark wars of late 2013? They began when Gawker contributor Tom Scocca wrote a terrific essay defending the snipey, caustically ironic sensibility widely denounced as “snark” against what he saw as the sententious, self-righteous faux-positivity of the powerful and privileged, identified as “smarm.” The piece called out bestselling author, speaker and New Yorker essayist Malcolm Gladwell as a prime purveyor of said smarm, so unsurprisingly came in for a strong (and, dare I say it, somewhat smarmy) rebuttal from him. Gladwell cherry-picked quotes from Scocca’s piece that made him seem humourless and wildly unpleasant, then proceeded to cite another of the year’s remarkable essays—this one a brilliantly argued and thoroughly depressing meditation by Jonathan Coe in the London Review of Books on the limits of political satire. “It’s not the respectful voice that props up the status quo,” wrote Gladwell, channelling Coe, “it is the mocking one.”

I had read Coe’s piece, “Sinking Giggling into the Sea,” when it came out and, as a politically minded comedian, had been winded by it. I’d winced through sentence after sentence like the following: “Famously, when opening his club, The Establishment, in Soho in 1961, [Peter] Cook remarked that he was modelling it on ‘those wonderful Berlin cabarets which did so much to stop the rise of Hitler and prevent the outbreak of the Second World War.’” Dude. Fucking ouch, dude.

The question of what humour can and can’t do to subvert or protect us from that which terrifies us and oppresses us, in either our political or our personal lives, is an open one. Can a tyranny be toppled in a Chaplinesque pratfall? Or does laughter anaesthetize us against injustice? Can finding humour in the dark corners of our lives give us the strength to confront what’s hurting us? Or does it let us run away from our own problems and adopt a callous attitude to those of other people? The answer, as in virtually every cheesy, rhetorical, straw-man dichotomy like the ones I’ve just set up, is both and neither.

When my friend Bill and his fiancée were visiting her mother, who was in the last stages of cancer and running constantly to the bathroom to vomit, he turned to his beloved with a look of deep concern on his face and said, “Do you think she might be bulimic?” Now: Is that one of the most tasteless jokes ever made by anyone I know? Absolutely (and I’m a stand-up comic, so please believe me when I tell you that is saying something). Would Bill be a horrible person if that were all he ever offered, emotionally, in life’s difficult spots? Most certainly. But was his fiancée forever grateful for the gust of air that his gallows levity had let into the room? Would I be relating this story here if she hadn’t been?

Ultimately, I think the philosopher Simon Critchley gets it right, in his book On Humour (those academics and their inscrutable titles!): “Humour does not redeem us from this world, but returns us to it ineluctably by showing that there is no alternative. The consolations of humour come from acknowledging that this is the only world and, imperfect as it is and we are, it is only here that we can make a difference.” In other words, every time a lounge act tells you “I’m here all week, try the veal,” he’s reminding you we’re all mortal, and furthermore, there are little baby cows being kept in tiny cages, so what are you going to do about that?

Life is terrible—politically, socially, personally—and it’s hilarious, and it is in that spirit that I offer the following essays. I have endeavoured to write something at least a little bit funny inspired by one terrible thing for every letter of the alphabet. Some are big-picture social things, like “C for Capitalism” or “U for Union-Busting”; others skew far more personal, like “F for Fat” and “D for Depression.” Some deal with minor irritants, like when stand-up comedy goes badly in “B for Bombing,” whereas others treat the hardest things I’ve ever experienced, such as “O for Obsessive-Compulsive Disorder” and “M for Motherlessness.” Some names have been changed, in case anybody (other than me) should be embarrassed.

I chose the alphabet as a frame for a couple of reasons. For starters, as anyone who’s read Edward Gorey’s The Gashlycrumb Tinies will avow, you can afford to get pretty dark while playing inside the alphabet because it takes the edge off; the alphabet brings us back to childhood. As a new father, I have read and enjoyed more than a few abc books over the past year (unlike when I read my daughter The Little Engine That Could once and, in a moment remembered with equal parts shame and irony, gave up halfway). But even before becoming a dad, I always enjoyed abecedarian collections, like the several written by my friend George Bowering. We were talking once about abc books and George said something along the lines of, “I can’t remember who said this, me or Roland Barthes, but the great thing about the alphabet is that it’s a totally random order, but everybody knows it.” In the end, that’s my favourite reason for using it.

One Response to “Move over, Bill Richardson”