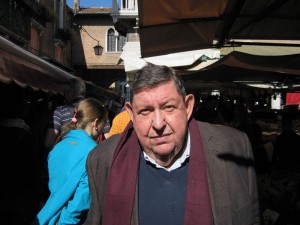 Concrete poetry is not a name given to the Trump Tower by Vancouver’s city planning department to excuse another abomination on the landscape.

Concrete poetry describe a process, most popular in the 1960s, whereby poets and artists playfully expanded the size, structure and appearance of letters to make unorthodox presentations that were visually stimulating and often disturbing, but also generally retained literal meaning.

Artist/poet Michael Morris and co-curator/editor Scott Watson will be in attendance on December 12 for the book launch and gallery exhbit for Michael Morris’ illustrated Letters: Michael Morris and Concrete Poetry (Kardosh/Black Dog 2015). The book takes its name from an 2012 exhibition at the Belkin Art Gallery that featured Morris’ large-scale paintings with inset mirrors that Morris made in 1969 in the context of contemporaneous examples of Concrete Poetry. The retrospective book includes essays by Jamie Hilder, David MacWilliam, Michael Turner, Scott Watson and William Wood. It also affords a chronology of Morris’s creations. Morris has been influential on the West Coast art scene since the 1960s. According to promotional materials, “he was central to the “scene with no scene” that emerged in the late 1960s and was a leader in the turn to the conceptual in the early 1970s.” Equally significant, he co-founded Image Bank in 1969 and the Western Front in 1973.

In 1981, Morris and Vincent Trasov accepted a residency in Berlin as guests of the D.A.A.D. Visiting Artist program. He stayed for 13 years, joining the ex-pat art community in what was West Berlin, returning to Victoria in 1994.

Michael Morris is the recipient of the 2015 Audain Prize for Lifetime Achievement and the 2011 Governor General’s Award in Visual and Media Arts in recognition of his achievement and outstanding contribution to contemporary art in Canada. Morris has lived in both Vancouver and Victoria.