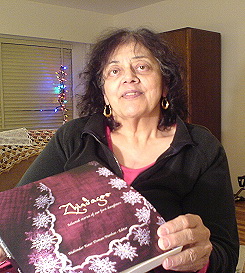 Mahinder Kaur Doman, editor of an anthology of stories by some of the first Indian women born in Canada from 1920 – 1935, has died.

In 2010, Doman self-published Zhindagee: Voices of Canadian Indian First Daughters. For the book, Doman had collected stories written by elderly Indo-Canadian women, born in B.C. in the early part of the 20th century. All the authors’ parents were pioneers from Punjab India. The mother of each of these women had been affected by the Exclusion of South Asian Females legislation, even though they were British subjects, from entering Canada until after 1920.

“The content is the first of its kind,” Mahinder Doman told BC BookWorld. “These women have never been acknowledged in any type of history (nor were their mothers). I have retained the cultural content and have included a Punjabi-English glossary. The photographs [in Zhindagee] are rare and have never been published anywhere.

“My hope is that others will publish more stories of women from that time span. My raison d’etre to compile this book was that if all first-born Indian women in Canada were removed to another planet, there would be their footsteps on Earth to mark their passage!”

Zhindagee received the 2013 Shakti Award in the Business & Entrepreneurship category.

Born and raised on Vancouver Island, Minder’s formal education took place in Canada and the USA and included nursing, geography, psychology, management, computer programming and business analysis. The youngest of five siblings, including three driven brothers, Minder had a gregarious personality and insatiable appetite for knowledge. Determined to chart her own path, she could hold her own when speaking to any of her diverse group of friends, including Canada’s first female Prime Minister, the Rt. Hon. Kim Campbell. Her work took her many places in Canada, and she always spoke of the transformational five years that she lived and worked on three First Nation reserves in BC and the Yukon Territory, and how it enriched her life.

Minder was a pioneer in advocacy for Women and Indigenous Rights, long before these were mainstream concepts. She collected, wrote and spoke about, the history of Indian Women in Canada, and was a published author. Her career also included consultancies to Federal and Provincial governments on the status of immigrant/ non-immigrant women, and employment equity, and she was well ahead of her time in these endeavours. Minder also participated at international forums for business development by women of Third World countries. An earlier career at Malaspina College (now Vancouver Island University) included the development of basic education skills for Adults without grade 12. Other career forays included public affairs programming on radio and reporting from the Commonwealth Heads of Government Meetings in Vancouver in the 1980s.