Megan Clendenan argues a healthy environment is a human right, one worth fighting for. 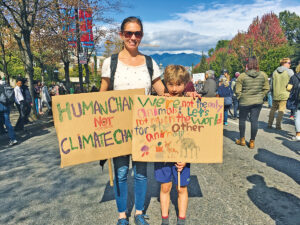 Megan Clendenan and her son Owen at the September 27, 2019 climate strike in Vancouver.

When the elements of survival we all depend on are threatened, people’s health, well-being and even their lives are also threatened. Defending human rights and protecting the planet must go hand in hand.

In December of 1952, the smog in London, England was so thick and suffocating, it killed thousands of people in five days.

Nicknamed the Great Smog, it was caused by coal-burning factory emissions, which got trapped close to the ground by an unusual weather system. Twelve thousand more people died in the ensuing weeks from damaged lungs caused by the pollution.

In 1960, a black rain fell in Boston, Massachusetts, due to a noxious mix of rain, coal and oil from local industry.

In 1991, black snow fell in the mountains of India. No one knew what it was until scientists connected the phenomenon to the hundreds of oil wells set on fire in Kuwait by retreating Iraqi army forces in the Persian Gulf War. Although originating more than 3,300 km away, the pollution had made its way to India. 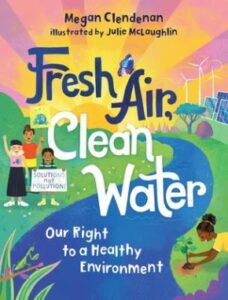 These are just three of the many stories that Megan Clendenan highlights in Fresh Air, Clean Water: Our Right to a Healthy Environment (Orca $24.95) her book for middle grade readers that is also suitable for adults.

Clendenan makes the case that humans depend on basic needs that should be enshrined as a human right, saying “Everyone, from me and you to people on the other side of the world, depends on clean air to breathe, safe water to drink and nutritious food—and so does every form of life on the planet, from oak trees to grizzly bears to ladybugs.

“In many communities around the world, people can’t rely on their drinking water because of the pollution caused by industrial waste. Each year more people die from unsafe water than from war.”

Virtually all of the damage comes from humans says Clendenan and started when we began to voraciously consume the earth’s resources and pollute rivers after the Industrial Revolution got under way in the 1700s. “Factories were built, and with them came new problems. Black coal fumes spewed from chimneys into the air. Many factories discharged toxic chemical waste directly into nearby rivers and canals, which then seeped into the soil. And for some people, nature became like a never-ending store filled with wood, water and gold.”

Only, Earth’s riches aren’t never-ending. “Today we still take more than we need to survive—and some people take much more than others. Right now, humans are using more resources each year than Earth can sustain over the long term. We do this in many ways, including cutting down too many trees and emitting more carbon dioxide than Earth can absorb. By some calculations, humans will need the resources from 1.7 Earths each year to continue to meet our current demands. But we don’t have 1.7 Earths.” 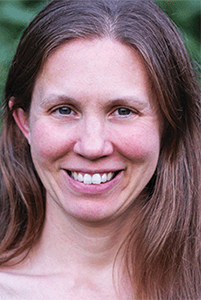 Having worked at one point for an environmental law group, Clendenan came to the conclusion that using the court system and laws could be a pathway to help protect people from pollution and toxic chemicals. “Human rights are freedoms that each human, no matter who they are or where they were born, is entitled to have. They include the right to be free and the right to be treated equally, as well as the right to life itself.

“When the elements of survival we all depend on are threatened, people’s health, well-being and even their lives are also threatened. Defending human rights and protecting the planet must go hand in hand.”

Clendenan profiles many people around the world who work to make positive changes, such as Canada’s Autumn Peltier, an Anishinaabe rights advocate from the Wiikwemkoong First Nation on Manitoulin Island, Ontario, who told the United Nations General Assembly in 2018, “No child should grow up not knowing what clean water is, or never knowing what running water is. We all have a right to this water as we need it—not just rich people, all people.”

Creating change through citizens’ actions is covered in the last chapter of the book. It includes the story of how teen activist Greta Thunberg started the Fridays for Future movement for climate change. One of the offshoots of this was a climate strike the week of September 20 – 27, 2019 during which more than six million people around the globe took part, including Clendenan and her son, Owen in Vancouver.

And finally, Clendenan provides a toolkit of ways to create change—everything from learning about the planet; using the power of science such as observing, collecting and sharing data; to gathering friends to protest. Or even writing a protest song.

Megan Clendenan’s message is: “each of us has something to give!” 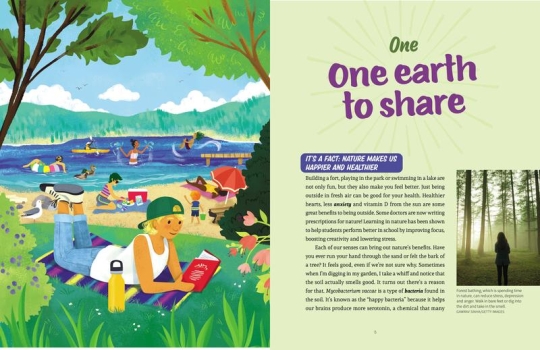 Page out of “Fresh Air, Clean Water” showing the use of illustrations, photos and vibrant graphics.