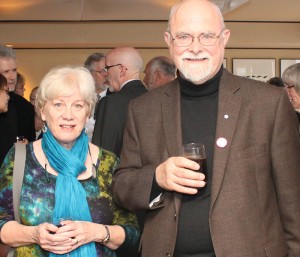 2014 marks the 40th anniversary of Harbour Publishing, the Madeira Park-based imprint, started by Howard and Mary White, that has recently incorporated Douglas & McIntyre to become the largest book publishing company in Western Canada.

As oral  historian Barry Broadfoot once said, “Howard White and his Harbour Publishing have done more for regional writers, the history of the West Coast, its people, its character, its fast-fading uniqueness, than any other publisher in North America–hell, in the world.”

The Vancouver Writers Festival is consequently featuring Harbour Publishing in a special event on Friday, October 24 at 1:00pm, on Granville Island, in Vancouver, “Celebrating 40 years of Harbour Publishing” (Event #57), featuring publisher Howard White and two Harbour authors, Robert “Lucky” Budd, author of Echoes of British Columbia, and Katherine Palmer Gordon, author of We Are Born with the Songs Inside Us.

According the Vancouver Writers Festival promo materials: “For 40 years Harbour Publishing has been publishing BC born-and-bred books, full of authentic knowledge about life on the coast. This afternoon, publisher Howard White is joined by two of his authors, whose new books exemplify Harbour’s considerable contribution to BC’s life story. Robert (Lucky) Budd’s Echoes of British Columbia combines text, archival photographs and original sound recordings to tell the stories of some of BC’s remarkable and inspiring pioneers. In We Are Born with the Songs Inside Us, Katherine Palmer Gordon reveals 16 candid stories of young First Nations people living in BC—stories of people whose unshakable belief in the importance of theircultural heritage adds to their well-being and success.”

This year, 2014, marks the 40th year that books bearing the Harbour Publishing imprint have been flowing out into the world from our headquarters in Pender Harbour, BC.
My wife, Mary, and I actually bought our first printing press in 1969, started our newspaper in 1970 and published the first issue of Raincoast Chronicles in 1972, but it wasn’t until 1974 that the first actual book with the first actual Harbour Publishing imprint appeared, so that’s what we are using as Harbour’s official start date. Our very first book (A Dictionary of Chinook Jargon, 1972) and the first issues of Raincoast Chronicles didn’t have any imprint on the spine because we didn’t know they needed one. When a concerned reader pointed out the omission, we decided to call ourselves Harbour Publishing because every business in Pender Harbour was Harbour this or Harbour that—Harbour Motors, Harbour Grocery, Harbour Barber. There was also a Harbour Pub and for years the freight truck delivered our books to them, which we might not have minded if they delivered the pub’s beer to us, but somehow that never happened.

The Harbour Publishing imprint burst upon the scene with three books in 1974 and nobody can now remember which was first, Build Your Own Floor Loom by Steve Lones or The Dulcimer Tuning Book by Randy Christopher Rain (a.k.a. Randy Raine-Reusch). These were quickly followed by Between the Sky and the Splinters, a book of logging poems by Peter Trower that helped establish a distinguished literary career and became a classic of its kind.

My approach to starting a publishing operation was conditioned by my background in isolated BC coast logging camps where if something wanted making you made it yourself. My first move had been to get a bulldozer and clear a piece of land. Then I tore down an old building supply building in Vancouver and used the lumber to build a print shop on the cleared land. Then I bought a press and learned how to print with it (sort of). Only then did I start looking around for a likely book to publish. And only after the book was printed and bound did I begin to wonder if anybody might want to buy it. I know, I can hear the wiseacres muttering that my approach hasn’t changed much. Luckily I am now surrounded by a brilliant and dedicated staff, some of whom have actually studied modern publishing methods in university, and they do their best to compensate for my atavistic habits.

I don’t suppose many onlookers, watching Mary and I pulling armfuls of spoiled paper from our antique press late into the nights of those first years, would have given our enterprise much chance of surviving, but four decades and some 600 books later, here we are.

I should mention that in building our original shop we had much essential assistance from my father, Frank White, who was so relieved to see us doing something productive he put his full support behind it. Dad continued to give us encouragement down through the years, so it is a happy coincidence that in Harbour’s 40th anniversary year he is celebrating a rather significant milestone of his own. On May 9, 2014, as he turns 100, we are helping him mark the occasion by publishing a book by him called That Went By Fast: My First Hundred Years.

It is obviously a bit special for us but in another way it is a typical Harbour book—full of authentic knowledge about life on the BC coast during the past century and meant to be read mostly by the community out of which it grew.

Looking back over the years, there have been many such books—Now You’re Logging by Bus Griffiths, Spilsbury’s Coast by Jim Spilsbury, Fishing with John by Edith Iglauer, Grizzlies and White Guys by Clayton Mack, Marine Life of the Pacific Northwest by Andy Lamb and Bernie Hanby and yes, The Encyclopedia of British Columbia edited by Dan Francis, to name only a few. Those are the kind of BC-born-and-bred books Harbour has become known for and the kind in which we take the greatest satisfaction because if Harbour hadn’t been here to coax them into life, perhaps that whole corpus of regional literature might not exist.

Meanwhile, the beat goes on. Last year Harbour made a significant leap in size and scope by taking charge of the historic Douglas & McIntyre list and we face the future with confidence and strength. Our profoundest thanks go to all the readers, writers and booksellers who have supported us along the way. It has been a great privilege.