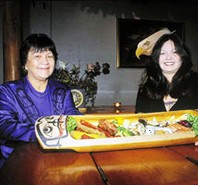 As managers of Vancouver’s Lillget Feast House restaurant, Dollie Watts and her daughter Annie Watts from the Git’ksan First Nations used their two decades of experience in the restaurant business to compile a cookbook for West Coast First Nation cuisine, Where People Feast: An Indigenous People’s Cookbook (Arsenal Pulp 2007).

It has now gone into its third printing.

Born in Port Alberni in 1961, Annie Watts has Gitk’san, Nuu-chah-nulth, Kwakiutl, Scottish and English ancestors. Before finishing secondary school, she worked as a waitress and became interested in food preperation. She later received a Culinary Arts Degree from Malaspina College (now Vancouver Island University), then pursued a degree in Computer Science. In 2004, Dolly Watts was declared a winner on an episode of the Foot Network’s Iron Chef program.

Annie Watts spent more than 12 years working for her mother as a manager of her mother’s restaurant, Liliget Feast House, on Davie Street in downtown Vancouver. The legacy of that restaurant is their co-authored cookbook, Where People Feast, An Indigenous People’s Cookbook, winner of a Gourmand Award in the category: Best Local Cuisine Book (Canada). It also placed in the top 10 for the World Title in that category. The Gourmand Awards help booksellers and buyers identify the best out of the 24,000 food and wine books published every year.

In July of 2011 Annie Watts self-published her beHealthy Cookbook with the help of two registered dietitians. As a result of her recipes, Annie Watts lost 80 pounds from April to November in 2013. The focus is on creating appetizing dishes that are prepared with the minimum of fuss by using few ingredients that can be easily found in grocery stores that specialize in nutrient rich ingredients, for example, soy beans and quinoa.