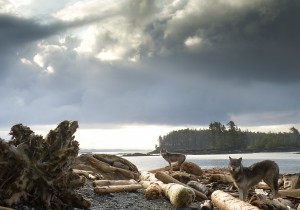 No, it's not a painting. This stunning image of two wolves is one of thousands of photos taken by Ian McAllister in the Great Bear Wild.

Now Ian McAllister’s Great Bear Wild: Dispatches from a Northern Rainforest (Greystone $50) underscores the importance of wilderness conservation in one of the northern hemisphere’s richest unprotected wildlife habitats with a personal narrative.

Through photos and a personal anecdotes in Great Bear Wild, Ian McAllister has mapped his journey through the ecologically sensitive Great Bear Rainforest, home to Canada’s largest grizzly bears. From the headwaters of unexplored river valleys to hidden offshore depths, twenty-five years of research, exploration and campaigning to preserve the forest’s biodiversity allows McAllister to provide a glimpse into one of the wildest places left on earth. Robert F. Kennedy Jr. has again provided a foreword. Raised in Victoria, Ian McAllister is the son of environmental activist Peter McAllister. He is a nature photographer, writer and conservationist who has dedicated his life to exploring the remote wilds of the BC coast. His images have appeared in numerous publications including International Wildlife, BBC Wildlife, Audubon, Sierra, and Beautiful British Columbia.

From 1991 to 1996, Ian and Karen McAllister charted an ecosystem which stretches from Knight Inlet to Alaska, taking thousands of photos, keeping journals, making seven pilgrimages in seven years, building their vision to protect a 2,000-kilometre strip of bear habitat. Like modern-day Darwins in a rain-soaked Galapagos, the McAllisters succeeded, in the spring of 1996, in reaching Smokehouse Creek off Smith Inlet, the last valley on their list.

The couple often used a trimaran to explore an area where approximately two thousand grizzly bears reside, where “white spirit” Kermode bears roam, where spring migration of eulachon can attract thousands of eagles, where pictographs abound and where an overzealous photographer can get bruised on the chin by a flying salmon—yes, it happened.

All this was undertaken in order to present their anti-logging perspective on behalf of the Raincoast Conservation Society, an organization which they co-founded with Ian’s father and some friends in 1990.

After the British Columbia government introduced measures to protect some of the Great Bear Rainforest in 2006, promising in February to allocate $30 million if the federal government matched that commitment, in February of 2007, the federal government pledged to spend $30 million to help preserve 1.2 million hectares of rainforest, the largest intact temperate rainforest left on earth. An additional $60 million was raised by private organizations and philanthropic groups–making The Great Bear Rainforest one of the most influential Canadian books ever.

Time magazine heralded Ian and Karen McAllister as “Environmental Leaders for the 21st Century” and credited the book as being “…the centerpiece for Greenpeace International’s North American forest campaign.” But as a founding member of the Raincoast Conservation Society, McAllister is not fully satisfied with the extent to which the Great Bear Rainforest has been protected and preserved.

For his follow-up natural history title, The Last Wild Wolves: Ghosts Of The Great Bear Rainforest, (Greystone 2007) Ian McAllister tracked, photographed and wrote about wolves over a five-year period during which he and his wife Karen were mainly living in the outport of Shearwater on Denny Island. It was shortlisted for the Roderick Haig-Brown Regional Prize and won the BC Booksellers Choice Award in 2008.

The Salmon Bears: Giants of the Great Bear Rainforest (Orca 2010). With Nicholas Read.