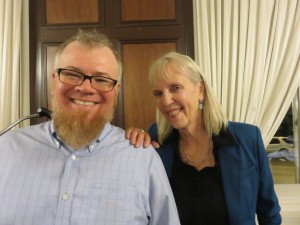 Always a bridesmaid, never a bride, the much-nominated M.A.C. (Marion) Farrant has received the $5,000 City of Victoria Butler Prize for her fiction collection, The World Afloat. Farrant’s work has previously been nominated for many awards including The Butler Prize, the Commonwealth Writers Prize, the Ethel Wilson Fiction Prize, the VanCity Book Prize, the National Magazine Awards, the Gemini Awards and two Jessie Richardson Theatre Awards for her play My Turquoise Years.

The North Saanich-based fiction author was beaming at Victoria’s venerable Union Club on October 15 when sponsor Brian H. Butler and the mayor of Victoria Dean Fortin announced The World Afloat had been accorded the eleventh annual Butler Prize. Farrant thanked her publisher Talonbooks for the luxury of being able to write whatever she pleases.

On the same podium, the affable shepherd-turned-science writer Daniel Loxton took home the $5,000 Bolen Books Children’s Book Prize for providing the text and most of the illustrations for Ptersoaur Trouble, his second book in the Tales of Prehistoric Life series from Kids Can Press, for ages 4 to 7.

Loxton is the Victoria-based editor of Junior Skeptic magazine as well as a picture book author for young children. After he wrote Evolution: How We and All Living Things Came to Be, he has written and illustrated the series called Tales of Prehistoric Life. In Plesiosaur Trouble, a flying reptile encounters a pack of tiny dinosaurs. For this story mixing digital illustrations with landscape photography, both Loxton and his co-illustrator Jim W.W. Smith were accorded Bolen Prizes, founded by bookseller Mel Bolen in 2008.

The well-attended $20-per-person gathering was emceed by Jo-Ann Roberts, host of CBC’s All Points West, and featured an opening reading by Victoria’s Poet Laureate Janet Rogers.

Born in Sydney, Australia, and now living in North Saanich, M.A.C. Farrant is the author of mostly satirical and philosophical short fiction, as well as the novel-length memoir, My Turquoise Years, a book of essays/humour, The Secret Lives of Litterbugs, and the stage adaptation of her memoir, My Turquoise Years, which premiered April 4- May 4, 2013 at the Arts Club Theatre’s Granville Island Stage in Vancouver.

Her stories in The World Afloat have been described as absurdist skewerings of family life by reviewer John Moore in B.C. BookWorld. Her work has been dramatized for television and appears frequently on CBC Radio. She has published in magazines such as Adbusters and Geist. Her many anthology contributions include “And Other Stories” (Ed. George Bowering, Talonbooks, 2001) and a commissioned piece on the work of Leon Rooke, (Exile Editions, 2003). She has been the West Coast organizer of the annual Canadian small press ReLit Awards, Co-Organizer, with Pauline Holdstock, of the Sidney Reading Series, 1994-2003, 2005-2007, and a faculty member at UVic’s Creative Writing Department, the Banff Centre, the Victoria School of Writing, and was Writer-in-Residence at Macquarrie University in Sydney Australia. Also a former social worker, she has since become a full-time writer.

Farrant’s memoir My Turquoise Years mainly focusses upon her family life when she was living in Cordova Bay in Victoria. It became the basis for her stage play, My Turquoise Years, a comic coming-of-age story set in 1960, a time of postwar optimism. In the stageplay, the narrator is fourteen. Plastic reigned and the colour turquoise was the height of chic. Marion, raised by Aunt Elsie, has grown up hearing tales of her glamorous, globe-trotting mother, Nancy. Just as Marion is blossoming into womanhood, Nancy suddenly announces a visit to Canada, throwing everyone into a tizzy.