“Letters made Canlit into an institution” 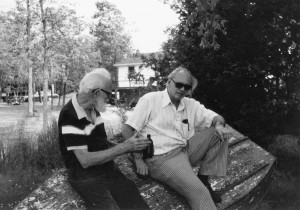 Venerable poets Earle Birney and Al Purdy were kindred spirits who developed a friendship through letters. Both were dedicated literary schmoozers—or, rather, they had to be in order to stay in the status game of Canlit—and both could be irascible and vain. Purdy especially needed contacts with the literary establishment because he operated outside of academe for most of his career. Birney needed to feel he had his finger on the pulse of contemporary writing. Hence their letters to one another make for fascinating reading. Birney could be wonderfully generous and he has been credited with encouraging literally dozens of authors. Purdy was managed by his wife, Eurithe, and affected an uncouth exterior that masked extensive reading as an auto-didact. Both could be temperamental. And so they cajoled, instructed and lauded one another. It was a complicated dance. On Thursday, June 26, at the UVic Bookstore, at 4 p.m., Nicholas Bradley will celebrate their 40-year jig by launching We Go Far Back in Time: The Letters of Earle Birney and Al Purdy, 1947-1987 (Harbour $39.95). An associate professor at UVic’s Department of English at the University of Victoria, Bradley has previously provided the afterword for The Collected Poems of Patrick Lane (Harbour, 2011). “I have spent the last several years preparing this edition of the correspondence,” says Bradley. “My book builds upon the editorial labours of Sam Solecki, who has been one of the most devoted readers of the poets’ works — as well as one of my great teachers. Solecki’s Yours, Al: The Collected Letters of Al Purdy (Harbour Publishing, 2004) is an essential book for readers who wish to know about Purdy’s life. We Go Far Back in Time provides an even closer look at the friendship between Birney and Purdy,two of the most significant Canadian authors of the twentieth century. Birney’s “David” is one of the most famous (or infamous) Canadian poems. Many of Purdy’s poems, such as “At the Quinte Hotel” and “The Country North of Belleville,” are beloved by readers. (“Al Purdy’s Statue” in Queen’s Park, Toronto, even has a Twitter account.) But the accomplishments of Canadian authors of the recent past — including Birney and Purdy — are ripe for reassessment. Much remains to be discovered about their lives and works. Our understanding of Canadian literature will change as biographical materials and previously unpublished works come into view. When Birney and Purdy were creating the poems for which they became known, writing letters was a necessity for authors. There could not have been a national community of writers otherwise; letters helped make Canadian literature an institution. Birney and Purdy travelled widely in Canada and developed a national network of literary friends and acquaintances. Their letters, in my opinion, are vital reading for anyone who is interested in the poetry and in the establishment of what today we recognize as Canadian literature. They provide context for poems, contain notes and drafts, and reveal important biographical details. The letters will be historically important, I think, as long as readers remain compelled by the authors’ works.” 978-1-55017-610-0