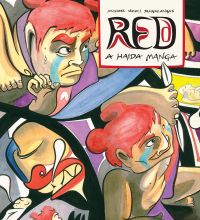 Michael Nicoll Yahgulanaas will be speaking at Indian Summer: A Festival of Arts, Ideas and Diversity in Vancouver this July. His talk will take place on on Wednesday, July 9, at SFU’s Goldcorp Centre for the Arts (149 W Hastings St.), as part of the “ARTPOLITIK” event in which three presenters will discuss the graphic novel as an extension of an older form of storytelling. The other presenters are Orjit Sen—one of India’s most renowned graphic artists—and David Wong—a Vancouver-based architect and author of Escape to Gold Mountain. Tickets are $15. Yahgulanaas will also be participating in a speakers’ series at the festival called “5 x 15” (Five brilliant speakers—fifteen minutes each) on Thursday, July 10 at 9pm, at the Fox Cabaret (2321 Main Street). The “5 x 15” event is for ages 19+ and tickets are $20 in advance or $25 at the door.

Michael Nicoll Yahgulanaas is most widely known as the originator of a new genre of cartoons he calls Hadia Manga, or Manhwa, with his graphic novel, Red: A Haida Manga (D&M, 2009). The hardcover version was nominated for a Bill Duthie Booksellers Choice Award, a Doug Wright Award for Best Book and 2010 Joe Schuster Award for Outstanding Canadian Cartoonist. Manga is the Japanese word for comics; Mahwa is the Korean word for comics. Yahgulanaas uses the term to establish that his Haida cartoons are positioned somewhere between two continents. Set somewhere off the northwest coast of B.C., his Red: A Haida Manga (D&M $19.95) is the story of an orphan named Red and his sister, Jaada, who captured and taken away when their village is raided. Seething with rage, Red wants to find his sister and take revenge on her captors. A paperback version has been released for the first time in May, 2014.