With his Master of Divinity degree, Pitman Potter might not look like a guy who plays guitar in a Grateful Dead cover band named Dustcover. But the ordained Anglican Deacon has taken his devotion to the Dead a step further with The Gospel and the Grateful Dead (Xlibris $15.99) 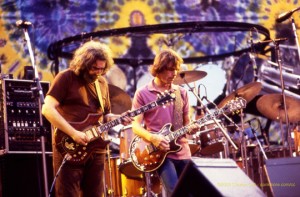 Also a UBC Law School professor, Pitman Potter has analyzed the music group’s commitment to community, their musicality and lyricism, and their manifestation of grace in relation to the Christian Gospel.

For his day job, Pitman Potter is a guy who spends much of his time as a UBC law professor negotiating multi-million international business contracts in Mandarin.It’s not likely he would be picked from a line-up as a guy who has also spent much of the past forty years travelling with other Deadheads to Grateful Dead concerts.

But ever since Potter first saw and heard the Grateful Dead in Washington D.C. back in 1969, as a student at St. Albans, he has been inextricably drawn the music of Jerry Garcia & Co, to such an enduring extent that he has now published a 100-page book that examines Christian underpinnings in the music of the Grateful Dead. For Potter, the improvised nature of the Grateful Dead’s music has emphasized community access and Divine encounter. “Their song lyrics conveyed messages about solidarity with the world and reconciliation with the Divine,” he claims. “And the life and work of Jerry Garcia exemplified the call of self-sacrifice for communities and friends, which, in Garcia’s case, extended to sacrifice unto death.”

All author’s proceeds from the sale of the book will go to charity for providing music lessons to needy kids.

Potter is perhaps better-known as a Professor of Law at the University of British Columbia Law Faculty, HSBC Chair in Asian Research at UBC’s Institute of Asian Research and a senior fellow with the Asia Pacific Foundation of Canada, but beyond being a high-status lawyer who greases the wheels of industry for deals with China, Potter has long been in touch with the divine.

As director of the Institute of Asian Research at the University of British Columbia, Porter organized a symposium on peace and reconciliation with the Dalai Lama from April 17 to 20, 2004, at the Chan Centre for the Performing Arts Vancouver with co-ordinator Victor Chan. When the Dalai Lama returned to Canada after a ten-year absence, he was accompanied on stage by two other Nobel laureates, Desmond Tutu, a longtime friend of the Dalai Lama, and Shirin Ebadi. Canadian Anglican Bishop Michael Ingham moderated a discussion that closed the conference. With Victor Chan, Pitman B. Potter has also co-founded a Tibetan studies program.

According to publicity info, Potter’s teaching and research are focused on the People’s Republic of China (PRC) and Taiwanese law and policy in the areas of foreign trade and investment, dispute resolution, intellectual property, contracts, business regulation, and human rights. Fluent in Mandarin Chinese (reading, spoken and written), Pitman practises in the area of Chinese business law. He specializes in  contract preparation for joint ventures in the areas of power generation, manufacturing, leasing and finance, and technology transfer.

Arundhati Roy wrote The God of Small Things. Now Ken Shigematsu, senior pastor of Tenth Church in Vancouver, one of the largest and most diverse city-center churches in Canada, has won a top Christian literary award for his debut book, God in My Everything (Zondervan, 2013). God in My Everything has received the Christian Living Book of the Year award at the Word Awards hosted by The Word Guild in Mississauga, on June 11. Here is a link to his acceptance speech: http://youtu.be/wMEri81edVc

Before entering pastoral ministry, Ken Shigematsu worked for the Sony Corporation in Tokyo, Japan – an experience that prompted him to explore personal disciplines that could enhance both his work and spiritual life.

God in My Everything had its genesis in a sermon Shigematsu preached shortly after his return from a pilgrimage to the holy sites of Ireland. The trip introduced him to the ancient monastic practice of a rule of life, which helped monks develop unique personal rhythms for lives as individuals and a community. Shigematsu began developing a rule for his own life. When he shared the idea with his congregation, he received a steady stream of requests for more information – beyond anything he has ever experienced as a pastor. “I don’t live in a monastery,” he says. “But I have found a way to live out my commitment to Christ in each of my different relationships and roles through a life-giving rhythm, what the ancient monks referred to as a rule of life.” The practice has allowed Shigematsu to cultivate a prayerful attitude and greater sense of freedom in all that he does despite a demanding schedule as senior pastor of a 2,000-member congregation, a mentor to younger Christian leaders, a husband, and a father. “God in My Everything shares with others the single, most life-transforming idea of my life,” he says. “I am grateful for its warm reception, which has been beyond my expectations.”

God in My Everything by Ken Shigematsu has also received an honourable mention for the Grace Irwin Prize, Canada’s largest literary prize for Christian writers.

Born in Tokyo, Shigematsu lives in Vancouver, with his wife Sakiko and their son Joey. He serves as a trustee for World Vision Canada, and is a recipient of the Queen Elizabeth Diamond Jubilee Medal. Proceeds from his writing support the work of World Vision and similar organizations around the world. For Tenth Church info, see www.tenth.ca

Now in its 26th year, the Word Guild awards receives hundreds of submissions annually across 28 award categories including non-fiction books, novels, articles, columns, poems, and song lyrics. The Word Guild consists of more than 300 writers and editors across Canada who write from a Christian perspective and publish work in a variety of genres. It has overseen the Word Awards, formerly known as The God Uses Ink Awards, since 2002, revamping and expanding the program from its original eight categories.

Other award recipients from British Columbia in 2014 included:

Kevin Schut of Abbotsford in the Culture category for Of Games and God (Brazos Press, 2013);

Christine Lindsay of Chilliwack for her historical novel Captured by Moonlight (WhiteFire, 2013);

Shelaine Strom of Abbotsford for the article in the Personal Experience category, “Waiting: A Passionate Pause” (Truth Media);

Carolyn Arends of Surrey for her series in Christianity Today, “The Trouble with Cussing Christians” and “You Probably Won’t Be Sent to Egypt;”

For more information, including a complete list of Word Award winners, visit
www.thewordguild.com.