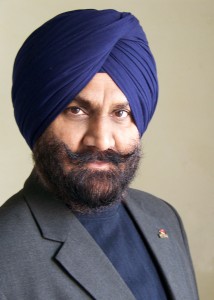 Jarnail Singh of Surrey is an artist, illustrator, designer, photographer, and art journalist who immigrated to Canada in 2000. Born in Punjab, India, he received a Bachelor of Arts degree from the Punjab University, Chandigarh. He was mentored by his father Kirpal Singh, an outstanding Sikh artist, from whom he inherited not only the painting talent but also the appreciation of historical icons and their role in the history of Sikhism. He continues the tradition of portraying Sikh Gurus and historical events. As well he has done much to capture the images of Punjabi folklore disappearing fast.

Jarnail Singh has exhibited his art at numerous national and international venues; his works are included in Central Sikh Museum, the Golden Temple, Amritsar, and several other important collections. The city of Surrey honored Jarnail Singh with the First Civic Treasures Award; he is among the twelve persons from art, literature and culture honored for their lifetime contributions to the city’s art scene.

“Painting for me is a process of infinite happiness and joy,” says Singh. “Many a time people ask me, what do you paint, and I reply, I paint everything, people, portraits, landscapes, anything that touches me, inspires me.”

His first book in B.C. is a collaboration with Ajmer Rode whose full-length play Komagata Maru was digitized and published on-line by Simon Fraser University. In conjunction with Singh, Rode then published A Journey with the Endless Eye: Stories of the Komagata Maru Incident (Ekstasis Editions 2015).

The volume was one of several books that appeared to mark the one hundredth anniversary of the controversial event of May 2014 when the Komagata Maru, a steamship carrying 376 Indian passengers, mostly Sikhs, was denied moorage in Vancouver’s harbour on May 23rd. The resulting standoff proved tragic when the ship was eventually forced to return to India. Many of the passengers were ex-military men who had made sacrifices for the British empire in wars and expected no problem in immigrating from one British colony to the other. This voyage was a deliberate testing of a discriminatory law which forbade immigration by sea unless would-be immigrants sailed directly from India. Denied food and water in Vancouver harbour, the would-be Candians were mostly forced back to the Indian port of Budge Budge Ghat, near Calcutta, where British-India police fired on them, killing several and injuring many more.

The Journey With Endless Eye: Stories of the Komagata Maru incident (Ekstasis 2014), illustrated by Jarnail Singh