Huskies to the rescue 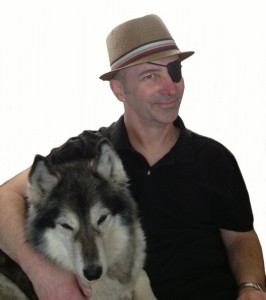 Glen Lovett worked for many years on animation storyboards for major film companies including Disney TV, Warner Brothers, Hanna Barbera, Nelvana, Nickelodeon and Atomic Cartoons before coming to B.C. in 1994 with his partner Kay (a Canadian) and their first Husky (Ruby).

“I noticed that there was a lack of quality adventure comics for kids aged 7 to 13’, says Lovett. ‘Right from the start I wanted to create a fun adventure comic for that age group with a Siberian Husky named Jasper as the hero. I’ve had six of them [huskies] over the years and so I have a lot of material to draw from.” (Pun intended).

With a clear-line graphic style reminiscent of cartooning pioneered by Belgium’s Herge, the creator of Tintin, Australia-born Glen Lovett of East Sooke first self-published Lost in Skookum Valley (Lovett Pictures 2007) for girls aged 7 to 13. The action evolves from an avalanche in the B.C. mountains that separates Ruby from her pup named Jasper. Mushing her dogsled team, Ruby must save Jasper from a major wildlife smuggling operation which she helps to courageously foil. It won a Gold citation at the Independent Publisher Book Awards in Los Angeles in 2008.

Lovett’s second illustrated young adult novel The Adventures of Jasper: Secrets of the Petroglyph (Lovett Pictures 2011) is about Jasper and her teenaged human companion Ruby who discover a Nuu-chah-nulth First Nations petroglyph on the west coast of Vancouver Island on a summer holiday canoeing trip. The petroglyph reveals mysterious clues and sets in motion an adventure deep in the rain forest. It was also a Gold Medal Winner at the Independent Publisher Book Awards (IPPY) in New York to recognize independently published books worldwide in 69 categories intended for the North American market.

For Lovett’s third release, The Solar Trail (Lovett Pictures 2015), Ruby visits her American cousin Banjo in Australia. As an engineering student, Banjo has entered a sun-powered car in a 3,000-km. race through the Australian outback. When they’re hijacked halfway, it’s up to Jasper to track them down.